Column: A treasure trove of Yavapai County stories in one place 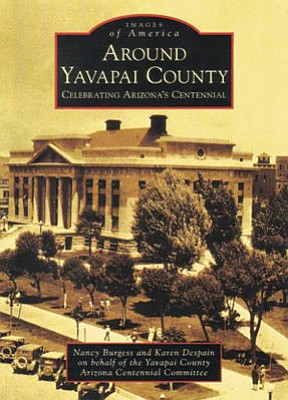 Courtesy image<br>“Around Yavapai County: Celebrating Arizona’s Centennial,” a book produced by the county Centennial Committee, offers a comprehensive overview of the county’s cities, towns, and rural communities and the people who have enriched its historical and cultural tapestry.

A pair of perceptive Prescott persons have parlayed a potpourri of pictures and prose into a powerful portrayal of past and present life hereabouts in their book titled "Around Yavapai County: Celebrating Arizona's Centennial." They are longtime residents Nancy Burgess and Karen Despain, who produced the book on behalf of our county's Arizona Centennial Committee.

Almost all of the 182 photographs therein provide vintage vignettes of specified areas of the county (i.e., central, northern, eastern, etc.), capped off with an overview of the Yavapai-Prescott Indian tribe and the Yavapai-Apache Nation, whereas the prose focuses on both bygone and more recent times. Burgess drew on her private collection for many of the photographs contained in the book, along with those obtained from the Sharlot Hall Museum's archives.

The introduction notes that the county's history is "rich and vast, fully deserving of preservation for future generations" and that it has "the quintessential history of cowboys and Indians, miners and merchants, and shady ladies." (Its vastness is evident in that as one of Arizona's original counties Yavapai covered some 65,000 square miles and is "believed to have been the largest county ever created in the United States." Subsequently, five other counties - Apache, Coconino, Gila, Maricopa and Navajo - emerged from the so-called "Mother of Counties" so that now Yavapai consists of a "mere" 8,125 square miles, which is comparable in size to the state of Massachusetts.)

Taking a look at a few of the photo captions:

• Did you ever wonder how Ash Fork got its name? Well, "in this 1890s view of Ash Fork, the town was in its prime as a railroad town. The original stage depot and townsite were located near Ash Creek, named for ash trees, where three southerly flowing forks of Ash Creek came together, giving the town its name."

• Depression? What Depression? "During the 1930s, Yavapai County tourism boomed. The romance of the American West was promoted by the Santa Fe Railway, which might deliver an eastern traveler into train stations in Prescott or Clarkdale. From there, tourists were driven in elegant motor coaches into wilderness locations such as Verde Hot Springs, which promoted the healthful aspects of soaking in the 100-degree mineral water along the Verde River."

• As you may be aware, the late 19th century wasn't kind to that town clinging to the slope of Cleopatra Hill: "Jerome was the victim of four major fires from 1894 to 1899. Each time, much of the business district was lost. In addition, there were mine fires, one of which lasted for 20-plus years." Also: "Gradually, Jerome became a near ghost town. With a peak population in 1929 of 15,000, Jerome was the fourth largest city in Arizona. The 1932 population was down to about 5,000." But "today, Jerome is a ghost town no more and is filled with creative and welcoming residents, shopkeepers and entrepreneurs."

• The Sedona Historical Society provided the photo of a poster depicting The Duke and a comely brunette, complete with this caption: "Almost 100 movies have used Sedona's red rocks - such as Coffeepot Rock, Bell Rock, and Cathedral Rock - for backgrounds, even in black-and-white. Many were Westerns, like 'Angel and the Badman,' John Wayne's first film as producer. Most of the big stars of the time have worked here, including Henry Fonda, Glenn Ford, Burt Lancaster, and Elvis Presley. Some TV shows and many commercials are still shot here."

• And this caption, accompanying a large photo of Viola Jimulla: "When Chief Sam Jimulla died in 1940, he was succeeded by his wife, Viola. A devout Christian, she organized the first Indian Presbyterian Mission. She is also known for her talent as a weaver of fine baskets. The only female chief among North American Indians at the time, Viola died in 1966 at 88 years old. She was greatly admired and many Arizonans mourned her death."

The book, a treasure-house of Yavapai history, is priced at $21.99 and is available for sale at the Sharlot Hall Museum bookstore, Hastings, Costco and Walgreen's.