Prescott gets the blues this weekend 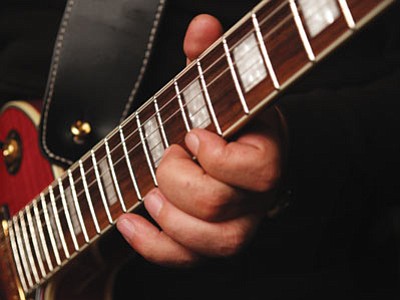 Bad News Blues bandleader Mike "Johnny Guitar" Blommer will be center stage Sunday when "The Blues from A-Z" takes over the Elks Opera House in a concert to celebrate the music genre.

The show starts at 7 p.m. and will explore the origins of the blues from the cotton fields of the Southern United States through the juke-joint days of the 1930s and 1940s and then into the era of electric blues when Muddy Waters, Howlin' Wolf, Willie Dixon and Jimmy Reed ruled the airwaves.

"This show will feature the hottest blues you'll ever hear from A-Z," said Robert Shaw of Lonely Street Productions, producer of "The Blues from A-Z."

As the performance sojourns through the blues chronology, the audience will hear how the blues expanded with the music of legends B.B. King, Buddy Guy and eventually into the more modern blues-rock sound of artists such as Stevie Ray Vaughan and ZZ Top.

The Arizona Blues Hall of Fame's goal is to educate the public and promote the veteran blues musicians and people who have made a substantial contribution to the blues music culture in Arizona.