Paulden enthusiasts to open their world to train buffs Saturday 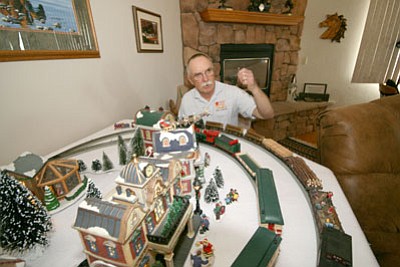 Review/Matt Santos<br> Paulden resident Donn Pease invites the public to view his elaborate model train exhibit during the CAMRRC Open House to be held this Saturday from 1 p.m. to 5 p.m. Pease has based his creation on historic train stations form Bisbee, Douglas, and Tucson.

The Central Arizona Model Railroad Club, represented locally by Paulden residents Peter Atonna and Donn Pease, will be hosting model train enthusiasts from around the state this coming weekend. The club has a special treat for any local train buffs as Pease and Atonna open up their home for public viewing.

The CAMRRC open house, to take place from 1 to 5 p.m., Saturday, Jan. 14, was scheduled to be open to the 70-plus club members, but Pease and Atonna have opted to open the event to the public in hopes of generating interest in the hobby.

"I have been interested in trains my whole life," said Atonna as he put a few final touches on the more that 1,500 feet of track that winds through his basement. "I can't put a dollar amount on this, I just love trains."

Atonna's 2,400 square foot basement contains an elaborate shop where he refurbishes trains and designs detailed landscapes representing local towns such as Paulden, Ash Fork, and Seligman. He is currently developing a representation of the famed downtown Chicago train station, including miniatures of surrounding brownstones and businesses, including a deli complete with neon window lights.

"I don't try to duplicate the exact towns or streets," Atonna said, "But I like to capture the feel of the area, like Seligman. I have classic cars and signs to give it that old Route 66 feel."

His representation of Paulden contains a restaurant and other storefronts.

"I think it is a little bit like what Paulden could be like, maybe down the road," he said.

Pease has designed more than 400 feet of track that dominates the basement of his Paulden home and also decorates much of his living room. He has designed his project after many of the towns he has lived in or visited in Arizona, including Bisbee, Douglas, and Tucson. Where Atonna has taken some creative license, Pease concentrates on the details of his landscapes, including the design and construction of bridges and train stations based on detailed photographs of actual structures.

Anyone interested in Saturday's open house or finding more information on the CAMRRC is encouraged to contact Atonna by calling 928-636-4228, by email to mjatonna@gmail.com, or by visiting www.trainweb.org/camrrc.