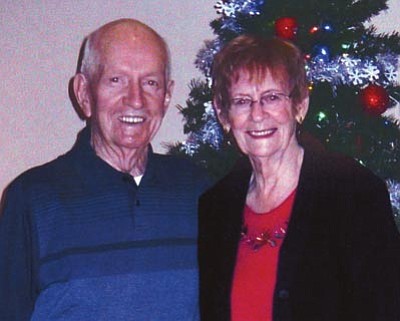 Phyllis and Larry Collette of Prescott Valley recently celebrated their 65th wedding anniversary in Las Vegas at the home of their daughter and son-in-law, Sherri and Larry Maghrak.

Dinner out and a show was the highlight of the evening.

The Collettes met during World War II when Larry's ship, the USS Panamint, was stationed at Mare Island Navel Ship Yard in Vallejo, Calif. They were both 17 at the time. After months of serving in the South Pacific, he returned and they were married in Vallejo on Dec. 21, 1946. Larry worked for the Department of the Army at Benicia Arsenal until closure, and the remainder of his working time was at Mare Island until his retirement in 1976. They moved to a home that Larry built in Pollock Pines, Calif., near Lake Tahoe, and lived there until settling in Prescott Valley in 2002.