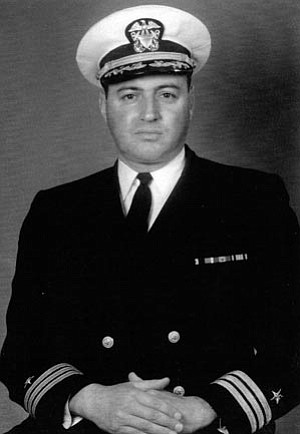 He is survived by his wife Patricia A. Clarke of Prescott; a brother, David Clarke of Carlsbad, Calif.; a daughter, Sally Risinger; grandchildren Sarah and Nicholas Risinger, all residing in Newton, Pa.; and two stepdaughters, Cynthia Feurriegel from Dewey, Ariz., and Wendy DeBrock of Mineral, Ill.

Being a native of Albany, N.Y., he attended and graduated from the Milne School and the University of Rochester, under the Naval Reserve officers training corps program. He received a Bachelor of Science degree in business administration and was commissioned an ensign in the U.S. Navy in June 1952. By subsequent promotions, he attained the rank of Commander, effective Sept. 1, 1966.

He served on the USS Latimer, USS John Paul Jones and USS Forrest Sherman from July 1952 to July 1958. Until 1960, he served as Force Plans Officer on the staff of Commander Destroyers, U.S. Atlantic Fleet, followed by a tour as Executive Officer aboard USS Claud Jones. During the period of 1962-1964, he served in a Joint Planning Billet in the Strategic Plans Division (OP-60) of the office of the Chief of Naval Operations.

Following his 22-year career with the Navy and living in Atlanta, Ga., he devoted his life to helping make other lives better. He was a longtime member of the Peachtree Presbyterian Church. He served on the board, and was a deacon and a major supporter of the church. Because of him, Peachtree Presbyterian Church grew physically and spiritually and was known to many for the love and care it gave back to the community.

One of Bob's most endearing achievements after retirement was the 17 years of volunteer work he did faithfully at the St. Joseph's Hospital in Atlanta. His many generous gifts helped build a new wing on the hospital. His name is well known in the halls of St. Joseph's Hospital.

HE WILL BE MISSED!

Graveside services will be conducted 11 a.m. Friday, Jan. 13, 2012, at the Prescott National Cemetery. The family requests that, in lieu of flowers, gifts may be given to your favorite charity.