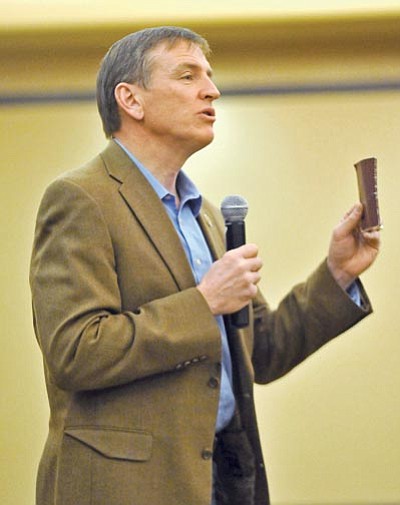 Matt Hinshaw/The Daily Courier<br> Congressman Paul Gosar talks with members of the public while holding up a pocket copy of the U.S. Constitution Thursday night at the Prescott Resort during a town hall meeting.

Gosar also repeatedly touted his land exchange bill that would enable the creation of a huge copper mine in southeast Arizona.

Gosar said he's one of only two freshmen House members who got a substantive bill through the House last year. A USA Today analysis concluded a dozen of the 94 freshmen accomplished that feat.

Gosar's bill allows a land exchange between the Tonto National Forest and Resolution Copper so it can develop one of the country's largest copper mines at a popular recreation area near Superior.

"You want to be utilizing natural resources properly," Gosar said.

He said the mine would create about 4,000 jobs. Resolution Copper officials estimate it would employ as many as 1,600 people at a time.

Critics note that the federal government wouldn't get any revenues from the foreign-owned mine.

The land swap has been in the works since 2005. The bill isn't moving in the Senate.

As in past town halls here, most of the audience members voiced support for Gosar's activities in D.C.

One constituent complained about paying for Gosar's recent mailers touting his accomplishments, but Gosar said it's important to let people know what's going on. He said he's not spending all his office's appropriation.

Gosar and audience members spent a lot of time talking about government spending.

The current national debt is $19 trillion and growing, Gosar said during his introductory speech. His number is about $4 trillion higher than the official federal government estimate.

"We don't have a taxing problem; we have a spending problem," Gosar said.

Phil Clayton of Prescott challenged that comment, and he said he's concerned that middle-class income has declined over the last decade.

"The Congressional Budget Office, the Treasury Department, the Joint Committee on Taxation, the White House's Council of Economic Advisors and a former Bush administration economist (Alan Viard of the conservative American Enterprise Institute) all say that tax cuts lead to revenues that are lower than they otherwise would have been - even if they spur some economic growth," according to FactCheck.org.

The non-partisan Congressional Research Service and Congressional Budget Office have estimated the 10-year federal government revenue loss from extending the Bush-era tax cuts beyond their original expiration date of 2010 will be $3.5 trillion or $3.3 trillion, respectively.

A 2011 study by the Congressional Budget Office found that the richest 1 percent gained about 275 percent in income between 1979 and 2007, compared to the average of 62 percent and only 18 percent for the bottom one-fifth of earners.

Another audience member said he supports President Obama's American Jobs Act and his proposal to cover the costs with higher taxes on the rich.

Gosar responded that he's tired of tax proposals on "exceptionalism so that everybody's the same."

President Obama proposes to pay for the $447 billion American Jobs Act largely by imposing new limits on itemized deductions for people earning more than $200,000 per year and families earning more than $250,000. He also recommended ending subsidies for oil and gas companies.

Gosar said fewer rules and regulations would help reduce government costs, but Clayton countered that "unchecked greed" led to the Great Recession and more regulations are necessary to avoid the same problem in the future.

While Gosar said he would support regulations to prevent another similar recession, he said Fannie Mae and Freddie Mac bear the brunt of the responsibility for the recession.

A Federal Housing Finance Agency analysis concluded that Fannie Mae and Freddie Mac subsidized only one-third of the mortgage market at the peak of the mania in 2006, although the two companies did recklessly buy and guarantee bad loans.