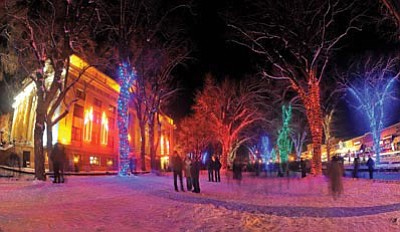 PRESCOTT - Coming off a successful year of fundraising and downtown lights, organizers of Prescott's Christmas events already are looking toward the 2012 holiday season.

"It's been a great year for us," Jaspers said, stressing that the success of the Courthouse Lighting, the Christmas and Holiday Light parades, and Acker Musical Showcase depends on the cooperation of many.

"A lot people volunteer a lot of time, and a lot of people donate a lot of money," Jaspers said.

Maurer pointed out that the two organizations had leveraged the $30,000 that the city contributed to the Courthouse Lighting this year into a total of nearly $90,000.

In addition, the effort received several one-time contributions through memorials to people who died over the past year, as well as a donation from the Western Heritage Foundation.

The additional money allowed for some improvements this year, such as the increase in the number of decorated trees on the courthouse from last year's total of 40 to this year's 101.

Early on, Maurer had reported that organizers were hoping to have 100 decorated trees for the 2011 event, as a prelude to the February 2012 Arizona Centennial.

To help reach that goal, organizers opted to lower the height of the decorations in the courthouse trees, and spread out the lights to more trees.

Maurer said the feedback on this year's lighting has been almost exclusively positive, and he had heard no complaints about the lower height of the lights.

Maurer and Jaspers said they hope to try to repeat the 100-tree scenario for next year's event, but they were uncertain about the resources.

"This runs on a little bit of a shoestring," Jaspers said of the annual Christmas events.

Because of the one-time nature of about $15,000 of this year's total, organizers say the $90,000 total could be difficult to replicate.

"It's going to be on the edge again next year," Jaspers said. About $10,000 in this year's money will carry over to the next year, the organizers said.