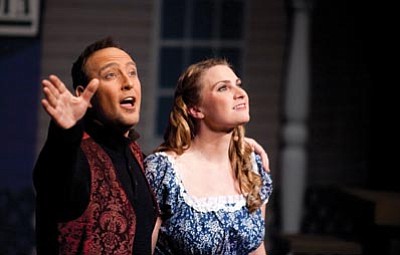 Les Stukenberg/The Daily Courier<br>Dino Palazzi as Billy Bigelow and Lauren Reiter as Julie Jordan perform during the dress rehearsal of the Prescott Center for the Arts’ production of Rodgers & Hammerstein’s “Carousel” Monday night in Prescott. The show opens Thursday night at 7:30 and continues on Feb. 24-25, March 1, 2, 3, 8, 9, and 10 also at 7:30 and Feb. 26 and March 4 at 2 p.m.

"Carousel," a story of hope, dreams realized or not, and love that ultimately triumphs in the song "You'll Never Walk Alone," brings together a wellspring of life's complexities set against incredible music in a production that opens Thursday on the Prescott Center for the Arts main stage.

The Richard Rodgers and Oscar Hammertstein II classic, adapted from Ferenc Molnar's 1909 drama, "Liliom," opened on Broadway in April 1945 and ran for 890 performances. Prescott audiences will have the opportunity to see "Carousel" at 7:30 p.m. this Thursday, Friday and Saturday, and March 1, 2, 3, 8, 9, and 10, as well as 2 p.m. matinees this Sunday and on March 4.

The Prescott Center for the Arts play is set on the New England coast in 1910, "with rousing songs about clambakes, sea-faring men, love and marriage, and beautiful days in June," writes Bruce Lanning in his "Director's Note." "But compared with other musicals written in the 1940s, this one takes on a more complex view of relationships dealing with violence in many marriages, men and women out of work, and even the single-parent family. It's a man-centered world with the man making the elaborate plans for the couple's lives, and the woman's dreams often set aside."

"Carousel" is ably directed by Lanning, and the music is under the accomplished hands of Judy Clothier, both of whom are well known in the Prescott-area for their theatrical expertise. Between the two of them, the local talent familiar to them and the actors they discovered in open auditions resulted in a cast that demonstrates aplomb in performing a play that touches all emotions and with music that delights the senses.

Dino Palazzi plays hapless carousel barker Billy Bigelow, who chases dreams but can't read the road map to reach them. Just as the audience, Julie Jordan (Lauren Reiter), finds Billy lovable. And even though he warns her, "I'm not a fellow to marry," they do.

The marriage is tumultuous, Billy is a genuine cad and abusive - until Julie works up the courage to tell him she is expecting a child.

At first Billy is speechless, then delivers one of the longest soliloquies in the history of theater, when he muses, "You can have fun with a son, but you've got to be a father to a girl."

Enter Jigger Craigin (Ered Matthew), a scoundrel of the first order, who steers Billy toward a path of thievery, because if his baby is a girl "What could I do for her? A bum with no money! I've got to be ready before she comes."

"I ain't got a cent. Money thinks I'm dead," he tells Jigger, and their plot to rob thickens.

Juxtaposed alongside Billy and Julie's relationship are mirthful Carrie Pipperidge (Hannah Palazzi) and staid Enoch Snow (Timothy Keena) - she, the wife who takes a back seat to her husband's plans for the future, and he, a man determined to own a fleet of ships one day while she stays home to raise their brood.

One marriage ends in tragedy, while the other survives. Memorable songs - "If I Loved You," "June Is Bustin' Out All Over," and, of course, "You'll Never Walk Alone" - artfully blend with dialogue that is witty, emotional, humorous and intense. The voices of Julie, Carrie and Netty (Leigh Harrison) add an opera-like quality to "Carousel," and the character Mrs. Mullin (Natalia Ofisa), owner of the carousel, dashes in and out of scenes with the air of a gypsy.

In the end, a simple star from the heavens offers a sign of hope for those who may falter if they remember that "When you walk through a storm, keep your chin up high."