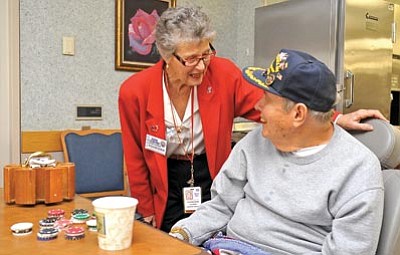 Matt Hinshaw/The Daily Courier<br> Joanne Schreiber visits with veteran Harry Smeltzer Thursday afternoon at the VA Medical Center in Prescott. Schreiber’s husband, Art, founded the Korean War Veteran’s Association Prescott Chapter, and she and other members of the chapter visit veterans at the VA after their meetings.

U.S. Navy submariner Harry Smeltzer's face lit up as he visited with Joanne Schreiber during a card game at the Bob Stump Memorial Veterans Affairs Medical Center in Prescott on Thursday.

Schreiber joined Korean War veterans Chuck Stohr and Carl Shanahorn as they visited veterans at the Community Living Center after the monthly meeting of the H. Edward Reeves Chapter 311 of the Korean War Veterans Association.

"The veterans love to talk about what they did, where they've been, and their branch of the service, especially with other veterans," Schreiber said. "They are such an important resource, you can learn so much from them, and they always thank you for coming to see them."

"Art brought us together in 2004, and served two years as our commander," said John McKinney, commander of the H. Edward Reeves Chapter 311 of the Korean War Veterans Association.

Art served in the U.S. Army infantry during World War II and in the 25th Infantry Division in Korea in August 1951, then in Company E in the 35th regiment as a master sergeant, fighting in the Iron Triangle and the Punchbowl.

"Art made you feel as if you'd known him for years, even if you'd just met him," said John Miller, a member of the Korean War Veterans Association.

Later, Art retired as an insurance claims executive and volunteered with the Yavapai County Jeep Posse.

"I started coming to the meetings after Art died four years ago," said Schreiber, an honorary lifetime associate member of the chapter. "I enjoy visiting with veterans at the VA after the meetings just as he did."

Stohr, who has led the VA Visitation Committee for the Korean War Veterans Association for several years, led Shreiber and Shanahorn to visit with some veterans in their rooms and later in the community room where they spoke with Jack Carter and Philip Smilee as they played poker and blackjack with other veterans.

Schreiber takes part in many of the chapter's activities.

"Jo also takes part in our annual picnic, the Rose of Sharon campaign and she is our representative in the Aisle of Honor at the VA on Memorial Day," McKinney said. "She is sincere, dependable, and very outgoing."

Schreiber said she is also active in the American Legion Auxiliary, bowls with the Pin Curlers in local league action, plays golf twice a week, does volunteer work, is part of the Sacred Heart School booster club, and started a widows night out on the last Wednesday of each month.

"We had a wonderful life together, Art and I. I miss him, and he never ever forgot to say I love you to me," Schreiber said. "I feel that my way to give back is to make people happy, so I do what I can."