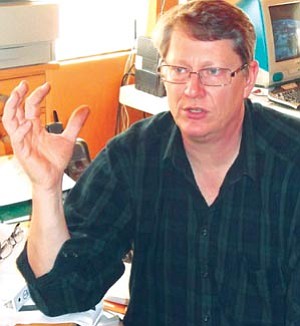 Courtesy photo<br> “What people don’t understand is 40,000 pounds of dissolved uranium goes down the river every year,” says Gregory Yount.

But the battle may not be quite over, if a Chino Valley prospector gets his day in court.

Gregory Yount has never taken an ounce of uranium out of the ground, but he resents the government's ruling that he can't do so on his three claims in the withdrawal area. He especially takes issue with how Salazar arrived at his decision to extend the moratorium for 20 years. He claims that the secretary had a legal obligation to take all relevant facts into consideration before making his decision, and that many of the fundamental factors leading to that decision are flawed.

"This was going to be his decision even before the FEIS (Final Environmental Impact Survey) was complete," said Yount, who spent thousands of his own money to investigate and stake the claims. "They basically did the EIS to support the withdrawal decision."

On Jan. 25, 16 days after Salazar's Record of Decision, Yount filed a request for injunction with the U.S. District Court of Arizona, asking the court to force Salazar to rescind his withdrawal.

Salazar cited environmental concerns, such as the protection of water in the Colorado River and perched aquifers in the area, from radioactive contamination.

"But what people don't understand or even think about," he said, "is that something like 40,000 pounds of dissolved uranium goes down the river every year." That loose uranium, he said, generally comes from normally underground breccia tube formations that become exposed through natural erosion. And a January 2011 U.S. Geological Survey report states that "the elevated concentrations may be related to natural processes, mining, or both."

Yount pointed out that the FEIS itself states that "data is sparse in this region and often limited."

Salazar has extended the withdrawal of the area from mining operations for 20 years in order to allow subsequent studies of the environmental impact of mining. Yount, though, thinks a blanket ban is redundant.

"Why withdraw a million acres when you have the ability to prohibit each single mine," he asked, referring to federal and state requirements to obtain a mining permit, and the necessity to post a reclamation bond with the BLM.

Salazar's decision also leans on the economic impact that mining could have on the tourism industry in the area of the Grand Canyon, which drew more than 4.3 million visitors in 2010. His Record of Decision refers to the canyon as "a cornerstone of the region's economy...generating billions of dollars in economic activity in the area."

Arizona Senator John McCain, who is promoting the Northern Arizona Mining Continuity Act that has languished in committees since November, claims the withdrawal will have a deleterious effect on the economy as well as other unintended consequences.

McCain called Salazar's decision "a devastating blow to job creation in Northern Arizona, particularly in Mohave County," and referred to the Arizona Wilderness Act of 1984 when he added, "certain environmental groups have chosen to break faith with a 30 year-old compromise...that successfully balanced conservation with mining and other commercial activities."

Seven Native American tribes have interest in the withdrawal area and have come out in full support of Salazar's decision. In fact, the FEIS includes a reference to his contention that "...mining within the sacred and traditional places of the tribal people may degrade the values of those lands to the tribes that use them."

Yount, though, said the argument is one that a federal court struck down in 2009 in Navajo Nation vs. USFS, in which the tribe sought to prevent snow-making using reclaimed water at the Arizona Snow Bowl.

In that case, the 9th Circuit Court of Appeals ruled that the preservation of someone's "subjective spiritual experience" is not a necessary component of religious freedom.

Yount refers to that decision as "established law" when he says that, in this case, "Salazar had essentially granted them a preference for their religious requests."

The withdrawal will not stop uranium mining altogether in the area. At least three, and as many as 11, mines still will be able to proceed, having already gone through a permitting process. Yount's three claims, however, will not pass that test, as he has not yet been able to establish the certainty that ore exists in the breccia tubes he said he has identified.

With the withdrawal, though, Yount said that investors have fled from the area, rendering his claims all but worthless, at a time when prices are on the rise after the post-Cold War use of dismantled warheads for nuclear power generation has nearly run its course.

"If the withdrawal hadn't been done, my projects would be ready for drilling," Yount said, adding that he expects to see the market price for the heavy metal to rise, based on the likelihood of increased demand in eastern markets such as Indonesia, India and China.

The government's reply to Yount's request for injunction is due March 5, and supporters of Salazar's decision are likely to join the fray.

"We fully support Secretary Salazar's 20-year moratorium on new mining activity," said Roger Clark, air and energy program director for the Grand Canyon Trust, "and we will intervene on behalf of the government in this case."