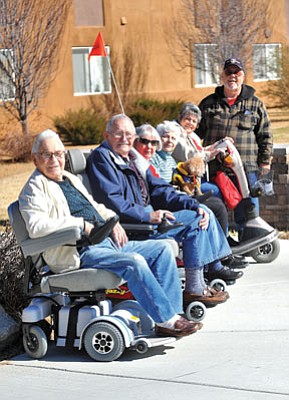 Matt Hinshaw/The Daily Courier<br>From left to right, Armond Alarie, Dennis Riesberg, Bea Lee, Donna Duran and Peggy Petrillo were recently given scooters to help with their mobility from the Shining Star Program. The five recipents are either veterans or spouses of veterans.

Now that she has an electric scooter, Peggy Petrillo has the freedom to go where she wants when she wants, and that means so much to her.

"I can go to Safeway when I want, I used the scooter to get to the movie theater, and I can take my dog Reddie Boy for a walk around the apartments," said Petrillo, who noted that congestive heart failure keeps her from walking long distances.

Petrillo and four other residents of the Sun Gate Villa Senior Community in Prescott Valley received free motorized wheelchairs and scooters from the Shining Star Program, a nonprofit that refurbishes medical equipment and donates it for free to veterans in need.

Each of the recipients were either veterans or the spouse of a veteran and had a medical need for the equipment but couldn't get their insurance to cover the cost of it and that's where Shining Star stepped in, noted Dennis Spicknell, founder of the Shining Star Progam.

Petrillo, whose late husband was a veteran, said she found out about the program on the Internet. After receiving her scooter, she told her neighbors about it.

"I think its great and I expect to use it a lot outside the apartments as the weather warms up," said Bea Lee who received a motorized wheelchair.

Dennis Riesberg said his motorized wheelchair will come in handy as he works in the community garden and as he goes to the movie theater and library at the apartments since the complex is very spread out.

"It's tremendous. Now I can get around and enjoy being outside," Irene Smith said about her motorized wheelchair.

Armond Alarie, who served in the Army as a military police officer in Italy during World War II, said he's just had the chair for a little while, and the ease of getting around is priceless to him.

Spicknell said the idea for the Shining Star program came to him several years ago while he was being treated at the Bob Stump Veterans Affairs Medical Center in Prescott.

"I was talking to the Man Upstairs and told him this is not what I had planned for retirement," Spicknell said. "When I fell asleep on a gurney, I thought I heard two nurses saying we never have enough wheelchairs for people."

Spicknell said he thought about how some people have wheelchairs in their garages that they don't need anymore and how it would be great to get those wheelchairs to veterans who don't qualify through the VA, but could still use them.

"I kept thinking about it, and I decided I could do it," Spicknell said.

Spicknell said he's in the process of applying for a grant that would help the Shining Star Program continuing its work helping veterans even after he's gone.

Spicknell said while he is always looking for wheelchairs and scooters that people no longer need, he also needs veterans in need of them to contact him by email at dennis1_star@yahoo.ca.

Anyone interested in donating to the fund that helps Spicknell put new batteries in the wheelchairs and scooters should contact Budget Batteries in Prescott at (928) 445-2449.