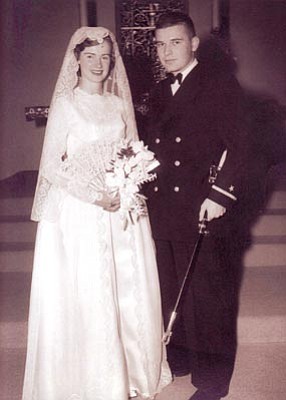 Capt. and Mrs. Albert Landeck will celebrate their 50th wedding anniversary on Feb. 3, 2012. They were married Feb. 3, 1962 in the Wesley Methodist Church on the campus of the University of Illinois, Urbana, Ill. Both Al and Roberta were students at the University when they met. Al was from Southfield, Mich., the son of Al and Rae Landeck and Roberta was from Champaign, Ill., the daughter of Austin and Eleanor Abell. Al was in NROTC and commissioned as Ensign the day before their wedding.

The first nine years of their marriage, he was on active duty. His first assignment was to a destroyer, the US Hazelwood, home ported in Newport, R.I. After that, Al was assigned to the submarine USS Tang, Pearl Harbor, Hawaii. Next, he had a tour at Ohio State University as professor of Naval Science. Al's next assignment was to the submarine, USS Diodon in San Diego, Calif. While on active duty, Al took part in the Cuban missile crisis and did three West-Pac tours off Vietnam. After this, the Landeck's returned to Ohio where they lived the next 20 years. Al retired from the Navy after 22 years, the last years served in the reserves. He worked as a financial planner for Rockwell International in Columbus, Ohio and later El Segundo and Seal Beach, Calif. Roberta worked as a CPA in Ohio and in California. They have three children and six grandchildren; son Albert (Trish Jalbert) and children Gwen and Albert Duncan of Amherst, N.H., daughter Jennifer Landeck-Riker (Chris) and children Liam and Rhiannon of Lakewood, Ohio, and daughter Deborah Stahl (Mike) and children Allison and Mike of Yucca Valley, Calif. Al and Roberta moved to Prescott in 2003 to be closer to Roberta's mother who had lived in the Phoenix area for many years.