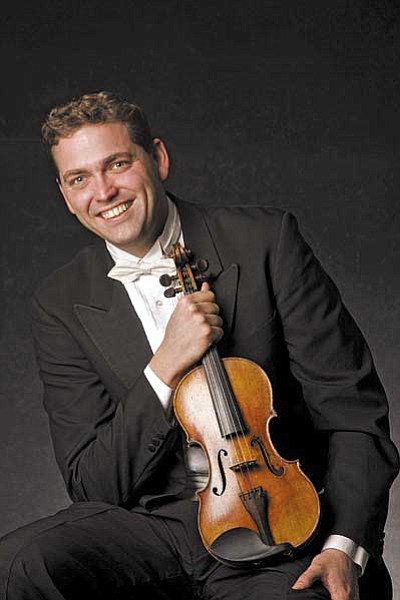 "We're really looking forward to Moeckel's solo performance," said Carol Sundberg, president of the Yavapai Symphony Association. "Because he always plays with such passion and energy, his performance should be exciting, especially as Tchaikovsky's "Violin Concerto" is one of the most demanding and best known works in the violin repertoire," Sundberg continued.

The concert begins at 3 p.m. with a pre-concert lecture about the performance starting at 2 p.m.

Moeckel, who was born in Germany, has been playing the violin since age 4 and gave his first solo concert performance at age 8.When he was 11 years old, he took a break from the violin to become the principal soprano soloist for the renowned Vienna Boys Choir. In addition to his current position with the Phoenix Symphony, Moeckel plays extensively in other venues throughout Europe and South America.

Also on the schedule for the January concert are Schuman's "Symphony No. 4 in D Minor," and one of beloved American composer Aaron Copland's signature works, "El Salon Mexico." Copland composed "El Salon Mexico" during the 1930s when he traveled frequently to Mexico for working vacations and became intrigued with the notion of basing a composition upon traditional Mexican melodies. It is one of his most performed pieces.

According to Sundberg, good seats for the Jan. 6 concert are still available and range in price from $28 to $39. Tickets are only available from the Yavapai Symphony Association, sponsor for The Phoenix Symphony's Prescott performances. YSA's Office, 228 N. Alarcon St., is open 9 a.m. to 2 p.m., Monday through Thursday, and the Friday before each Sunday concert, for patrons wishing to purchase tickets in person. Tickets also may be purchased by phone, (928) 776-4255, for will call pick up at the Performing Arts Center beginning at 1:30 pm on the day of each concert.

Full-time college students can purchase any available ticket for $10. Elementary or secondary students and an accompanying adult can receive complimentary tickets to concerts as long as row B orchestra seats remain available.

More information about the Yavapai Symphony Association, including details of Association's Music Scholarship program are available at www.yavapaisymphony.org.