Local authors take readers back into Arizona's past 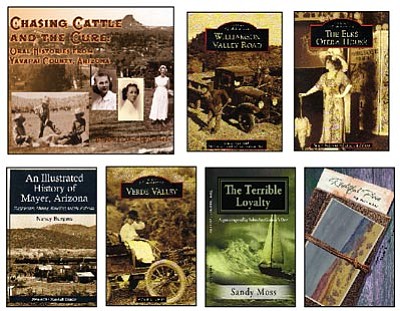 Arizona's centennial year prompted local writers to let the muses sitting on their shoulders inspire them to write about days of the past.

McCroskey is well known for the oral histories she has collected over the years, establishing a legacy of past generations for the enjoyment of those to come. During her 21 years as a contract historian for Sharlot Hall Museum, she interviewed more than 300 people.

One hundred of these one-on-one visits comprise her recent book, "Chasing Cattle and the Cure: Oral Histories from Yavapai County, Arizona," which came out earlier this year.

How else would history buffs know of this county's pioneers, if their stories were not the subject of this enthralling coffee-table book?

As McCroskey writes in the book's introduction, she covers the military presence at Fort Whipple, miners, ranchers and health-seekers who came to the area in search of relief for respiratory illnesses and tuberculosis. Readers learn of many whose names they will recognize, as well as others who might have faded into oblivion if it were not for "Chasing Cattle and the Cure: Oral Histories from Yavapai County, Arizona."

Not only are the book's stories of pioneers classic narratives, McCroskey has also included scores of photographs she has collected that give a dimension of life to her writing.

McCroskey's book is available at Hastings, the Peregrine Book Company, the Phippen and Sharlot Hall museums, Mercy Guitar and The Fiddle Doctor and Ogg's Hogan.

She describes her book as "a pictorial history of the people and places that made Williamson Valley Road historic and scenic. Six chapters and 240 images take the reader along paths, trails, wagon ruts, rails and roads that developed into one of the major routes of the Arizona Territory."

In compiling her book, Lopez gives "first-hand accounts taken from oral histories, diaries and conversations with current citizens, plus a few legends thrown in for fun."

Proceeds from the sale of the book support the Yavapai County Morgan Ranch Nature Park, located 13 miles north of Prescott at the intersection of Williamson Valley Road and Nancy Drive.

The history of the Elks Opera House is preserved in a book of the same name that Elisabeth Ruffner and Parker Anderson, both prominent in the community of historians, wrote in this centennial year.

The book brims with information that paints the history of the venerable theater, from the time it was built in 1905 to the magnificence of its detailed restoration in 2010. Chapters include how the theater began, as well as "Vaudeville and the Roaring Twenties," "Magical Movie Memories" and "The Modern Era." Scores of photos enhance the book's richness.

Quintessential historian Nancy Burgess completed "An Illustrated History of Mayer, Arizona - Stagecoaches, Mining, Ranching and the Railroad" this past summer, a book she wrote over 10 years.

If people driving Highway 60 think Mayer is a sleepy little town, Burgess' book will revive interest in stopping to enjoy it.

"I wanted a biography of the Mayers, but it's not just about them," Burgess said in an interview about the family for whom the town is named. "Mayer was the center of the whole area for mining, ranching and railroad. Those three things were key to a lot of small communities through the West."

Like the other books about Yavapai County's past, Burgess' book is filled with photos that make it a fun read.

"An Illustrated History of Mayer" is available at Sharlot Hall Museum, Peregrine Book Company, Big Bug Station and online at Amazon.com and Barnes and Noble.

Burgess was also instrumental in writing "Around Yavapai County - Celebrating Arizona's Centennial," which she co-authored with Karen Despain.

Along with "Williamson Valley Road," The Elks Opera House" and "The Verde Valley" its publisher is part of Arcadia Publishing's "Images of America" history books.

"Around Yavapai County" was written specifically for Arizona's 100th year and is a comprehensive history of the county's cities, towns and rural communities. As with all Arcadia books, it has more than 200 photographs, all of them archival images of people and places of yesteryear.

"Around Yavapai County" is available at the Raven, The Old Sage Bookshop, Ogg's Hogan, Phippen and Sharlot Hall museums, The Galloping Goose and the Prescott Chamber of Commerce.

Bill Cowan wrote "Verde Valley," and filled it with the lore of Yavapai County's eastern side, with chapters about its Native American heritage and military presence, along with bird's eye views of towns and places such as Oak Creek, Sedona, Cornville, Red Rock, Cottonwood, Clemenceau and Clarkdale.

"Verde Valley" also boasts a multitude of photos that reflect the richness of yesteryear.

This book is available at various historical sites and societies in the Verde Valley and also Ace Hardware in Cottonwood and Camp Verde, Candy's Creekside Cottage and Adventure Unlimited Bookstore.

Radio personality and former Courier reporter Sandy Moss clung to a story for many years before she wrote "The Terrible Loyalty," a true story of life-long friends who "ventured into the heart of the endless ocean at its loneliest point in a 20-foot sailboat." This voyage was "meant to be their great adventure," one they had planned as "an uneventful sail," until "they encountered an unexpected storm that threatened their lives, threw them unmercifully off course and sealed their fate irrevocably together as they battled to survive."

"The Terrible Loyalty" is about her husband, Mike, and his best friend, Dave, and is available at The Peregrine Book Company and on Amazon.com.

New to the Prescott realm of authors is Amy Hale Auker, who has published "Rightful Place," a collection of essays "deeply rooted in intimacy with the land."

Auker said she wrote her work, "a portrait of ranch life and the people and animals who live far off the pavement in a contemporary world" on the ranch of a Texas panhandle.

Auker writes and rides on a ranch outside Prescott with her husband, Gail Steiger. She recently signed a contract to release her first novel, "Winter of Beauty," in 2013. "Rightful Place" won a 2012 WILLA award for creative non-fiction and is available at the Phippen Museum, on Amazon.com or from www.amyhaleauker.com.