Snow causes big mess along I-40 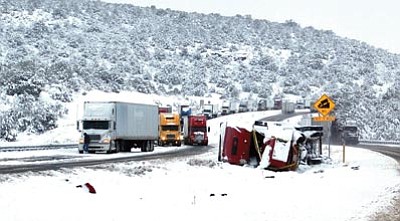 Tracy Wiederaenders/Courtesy photo<br> Semitrucks maneuver to go east up a hill on I-40 around the wreckage of a Friday night crash in the median.

Prescott police and fire agencies didn't report any major accidents in the snow Saturday, but it was a mess in northern Yavapai County.

Rain turned to snow late Friday night in Prescott and snow continued to fall throughout much of Saturday, producing about four inches of snow depth in Prescott by nightfall.

"It's been kind of quiet," Prescott Fire Dept. Capt. Jeff Knotek said. "We haven't even had any fender-benders."

Interstate 40 in northern Yavapai County was a different story. The Arizona Department of Public Safety temporarily closed part of I-40 east of Ash Fork, so it looked like a parking lot along Highway 89 in Ash Fork as drivers waited for the interstate to reopen. DPS warned drivers in Prescott about the I-40 detour with a sign at the intersection of highways 89 and 89A. People who got onto I-40 before the closure faced miles of backed-up traffic.

An Arizona Department of Transportation spokesman said eastbound I-40 between Ash Fork and the Parks exit about 15 miles west of Flagstaff reopened about 3 p.m. Saturday, and westbound lanes an hour later. The approximately 50-mile section of I-40 saw heavy snow and multiple vehicle spinouts.

ADOT was recommending tire chains and four-wheel drive vehicles on Interstate 17 between the Sedona turnoff and Flagstaff. Spokesman Garin Groff said many  spinouts and crashes occurred on I-17 Saturday. State Route 64 from SR89A to the Grand Canyon south entrance and the road to Mount Lemmon outside Tucson also were closed.

Some of the higher snowfalls across northern Arizona were 24 inches eight miles north-northwest of Flagstaff, 20 inches at Forest Lakes, 8.2 inches at Williams, 5.8 inches at the Flagstaff airport, 12 inches at Strawberry and 1 inch at Payson.

The Weather Service expects the snow to end by 11 a.m. today in Prescott; then the sun will break through this afternoon through Monday before another storm system arrives Tuesday and Wednesday with rain and snow. The agency is forecasting a 50 percent chance of rain in Prescott Tuesday, 70 percent chance of rain Tuesday night, and then a chance of snow Wednesday. Temperatures should stay below 50 degrees through Wednesday.