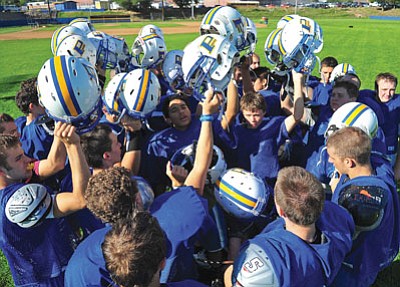 Matt Hinshaw/The Daily Courier<br>The Badgers wind down at the end of Wednesday’s practice in preparation for their home opener.

In what represents one of its smaller classes in recent memory, the Prescott High School Athletic Hall of Fame will induct two former multi-sport athletes and a one-time prominent team during its annual enshrinement ceremony Friday.

Cameron Dow, who wrestled and played football in the mid-1990s; Danielle Wetten, who competed in track and field and badminton in the mid-2000s; and the 2003-04 varsity girls' soccer squad, which advanced to the Class 4A state semifinals that season, comprise the Hall's Class of 2012.

Prescott High's athletic department will pay a special public tribute to them during halftime of the Badger football team's Hall of Fame game versus Glendale Deer Valley Friday night at Bill Shepard Field. Kickoff for the home opener is at 7 p.m.

Division II Prescott (1-0 record) began the 2012 campaign last Friday in Prescott Valley by blasting cross-town rival Bradshaw Mountain, 40-0. The Badgers should face a stiffer test against fellow D-II member Deer Valley, although the Hawks (0-1) lost 39-18 to Surprise Willow Canyon in their season opener a week ago at home. Last year in Glendale, PHS succumbed to the then-highly ranked Hawks, 43-6.

What follows is a breakdown of Dow's, Wetten's and the 2003-04 girls' soccer team's accomplishments at Prescott High.

• Cameron Dow: wrestling, football (1994-96) - A three-time letterman in wrestling, Dow won a region championship and finished in fifth place at the Class 4A state tournament in 1996 within the 171-pound weight classification.

Dow also lettered in football during the 1994 and 1995 seasons as a standout on the Badgers' defensive line. After the 1994 campaign, he garnered All-Region Honorable Mention honors at defensive end.

• Danielle Wetten: track, badminton (2003-07) - Wetten, a star thrower for the Prescott High track and field team for two seasons, captured a Class 4A, Division I state championship and Wells Fargo Region title in the discus in 2006.

That same year in the shot put, she claimed third place at the 4A-I state tournament and won the regional crown.

In 2007, Wetten took fourth place at state in the discus, shortly after nabbing her second consecutive region championship in that event. In the shot put, she posted a third-place finish at state prior to notching runner-up honors at regionals.

As a badminton player, Wetten lettered for four seasons, from 2003-06. Her most memorable moment in that sport came in 2005 at the 4A-I state singles tournament, where she placed third.

During the regular season, the Badgers went undefeated at 19-0 and snagged a Wells Fargo Region title behind the stellar play of All-State forward Cee Cee Odorfer, goalie Sarah Adams, midfielders Tanya Payne and Christine Penner, and stopper Ashley Adams, among others.

After piecing together a phenomenal 21-match winning streak that stretched into the playoffs, Prescott lost to eventual state champion Scottsdale Chaparral, 3-0, in the 4A semifinals that February to finish with a 21-1 overall mark.

The Badgers were sterling on both sides of the ball, and the school's sports record book reflects that fact.

Odorfer, who was inducted as an individual into the PHS Athletic Hall of Fame in 2010, guided a potent, high-scoring offense in which she registered the program's all-time bests for goals (40), assists (16) and points (96) in a season.

The team also compiled program records for most goals (97), most shots on goal (551) and most assists (67) in a campaign.

On defense, keeper Sarah Adams posted a goals-against-average of 0.62 and made 94 saves - placing her among the top three on Prescott's single-season list in both categories.

In addition, the Badgers surrendered a total of only 15 goals and pitched an astounding 12 shutouts that winter.