2012 election: A debate about debates 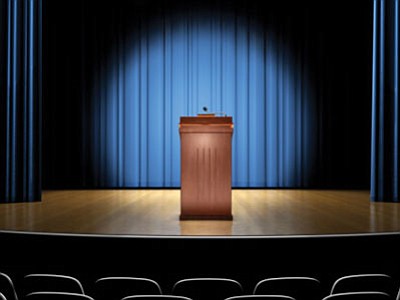 Dictionary.com defines a "debate" as: "A formal contest in which the affirmative and negative sides of a proposition are advocated by opposing speakers."

That is not what will take place during three exchanges between President Obama and Republican presidential nominee Mitt Romney, or the one vice-presidential exchange between Joe Biden and Paul Ryan.

The selection of liberal "moderators" for these sessions by the nonpartisan Commission on Presidential Debates is, as Joe Biden might say, a 20th-century model for the 20th century.

Has anyone come up with a statement of purpose for these sessions? It seems less about getting information useful to the public and more about showcasing TV anchors and reporters who mostly ask questions through the liberal prism of their own biases, hoping to produce "gaffes" by at least the Republican candidate.

"Diversity" is the stated reason for the selection of two female moderators - Candy Crowley of CNN, who said of Romney's vice-presidential pick, that it "looks a little bit like some sort of ticket death wish."

Question: What is the difference between a male liberal and a female liberal? Answer: There is none. That also would be true for any minority the commission might have selected as moderator, if that person were also a liberal. Debates should not be about gender or racial diversity; they should be about ideological diversity.

During the Republican primaries, Newt Gingrich proposed a series of Lincoln-Douglas-style debates with no moderator, just the two candidates having a conversation about how they would lead the country. But because we live in a TV age, which has conditioned us to brief sound bites, that kind of lengthy conversation might cause most eyes to glaze over.

Here are some better alternatives. 1) Let the country vote on moderators and any panel members like baseball fans do for the annual All-Star game. Since one of these men for the next four years will be spending our money, starting or ending wars, and regulating or de-regulating businesses we either did or did not build ourselves, the public has a vested interest in who wins the election. Let the people decide who should ask the questions that will generate information useful to them when they cast their votes.

2) Allow each candidate to pick one panelist to question the other candidate. President Obama might pick Rachel Maddow or someone else from liberal land to question Mitt Romney. Romney might select Rush Limbaugh, Sean Hannity, Mark Levin, or someone from Fox News (Chris Wallace did a credible job during the Republican primary debates) to ask questions of President Obama. Any of these would generate serious interest and boost ratings.

3) Have the candidates question each other. This has been tried on occasion in various races for other offices, but never consistently in presidential debates.

4) Put a former president on the panel. Since these men have had the rare experience of being president and know the challenges and unexpected events that often arise during a presidency, have Jimmy Carter, George H.W. Bush, George W. Bush or Bill Clinton question Romney and Obama (Dick Cheney, Walter Mondale, or Dan Quayle might question Ryan and Biden).

5) Put a "loser" on the panel. Let Ron Paul, Newt Gingrich or Rick Santorum ask questions. Losers in previous Democratic primaries might be selected, too. Hillary Clinton would be fun.

As for questions a moderator never asks, he (or she) might try these: What should government do less and we the people do more? What do you see as the constitutional limitations of government?

The tired "debate" format devised in 1960 for the televised Nixon-Kennedy meeting and made worse in the '70s needs serious updating. Everything else has advanced. So should these political face-offs.