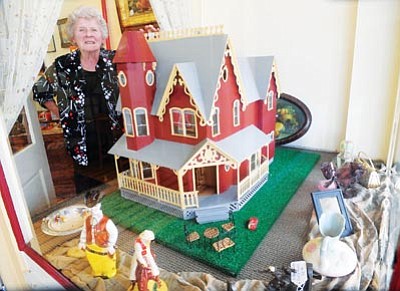 PRESCOTT - Eve Anne Colucci sat outside her antiques and collectibles store, Aviance, Wednesday afternoon as an occasional pedestrian walked by the shop at 141 N. Cortez St.

Colucci said she opened Aviance because she got bored after moving to Prescott from Long Island, N.Y., to retire. She spent 33 years as an antiques dealer.

She said she spent about three weeks readying her 850-square-foot shop for opening July 22.

"We completely renovated the inside and we refinished the floors," Colucci said. She chose the name Aviance because her shop is about "upscale, elegant and reasonable."

Noting the presence of other antique marts on the block, Colucci said, "As far as I am concerned, it was more the merrier. A lot of furniture is not quite antique, but it is fine furniture and it is reasonable."

She also used one word to describe business: slow. "It will take a little time."

Several doors north of her shop, Ty Fitzmorris, owner of The Raven Café, is preparing for opening Peregrine Book Company at 219 N. Cortez in a building that formerly housed Jazzy's Wine Bar. He will occupy 4,900 square feet of the building, which contains four suites totaling 6,728 square feet, according to a sign from leasing agent Carrera Investments LLC of Prescott.

Fitzmorris said he has been working for four months on the building and does not have an opening date.

Fitzmorris and his future general manager, Tom Brodersen, said the timing is right for opening a bookstore despite reports that the publishing industry is declining. He added the closure of Barnes and Noble Dec. 31 in the Prescott Gateway Mall has created opportunities for small- to medium-sized independent bookstores to emerge.

Both Fitzmorris and Brodersen acknowledged the immediate challenge as remodeling work took place in the gutted building.

"We are turning a warehouse into a bookstore," Brodersen said.

Fitzmorris commented, "We are taking it back to the 1930s look."

Fitzmorris, Colucci and other new and emerging merchants are giving a changing look to downtown. Granite Mountain Brewery recently opened at 123 N. Cortez, and Papa's Italian Restaurant is moving from 1124 White Spar Road to 129 1/2 N. Cortez (the former home for An American Jazz Grille).

Downtown is recovering from the Great Recession as well as a fire that destroyed three Whiskey Row businesses May 8.

"I think the demographic is changing," said Kendall Jaspers, owner of a namesake hamburger eatery on South Cortez Street since 1987 and executive director of the Prescott Downtown Partnership Inc. for two years. "I think our visitors are changing. I think we are seeing a younger set of visitors. I think they are more interested in recreational opportunities and events as opposed to historical tourism."

Downtown draws traffic "whether it is tourism or not," Jaspers said. "As a restaurateur, there is not much I can do to attract tourists."

Jaspers heads a merchants association that represents about 450 businesses in a district that stretches on the west to Summit Street, on the east to Alarcon Street, on the north to Sheldon Street and south to Carleton Street,

"The big thing with us is trying to keep the buildings full," Jaspers said. "There is very little vacant" retail space and a "fair amount of office" space available. "I think there is a lot of office space empty all over town. This is due to economic times."

Two retailers and a restaurant have opened on Montezuma Street - two on the Whiskey Row stretch between Goodwin and Gurley streets.

Devil's Pantry opened during Memorial Day - May 28 - on Whiskey Row at 126 S. Montezuma, owner David Seigler said. It serves a variety of food, including hot dogs, hamburgers, a variety of fries, funnel cakes and cotton candy.

Devil's Pantry appears to be thriving with after-school crowds during weekday and club-goers late night Thursdays through Saturdays.

A few doors to the south The Rancher's Wife opened during the Prescott Frontier Days Rodeo, at 156 S. Montezuma, in the Sam Hill's Co. building.

Owner Tammy Kelly stated via email that her store carries cowboy and Western collectibles, including handmade furniture and oil paintings. She also carries agricultural products from Arizona, including salsas, candies, nuts and jerky.

"We have clothing, we have crystal, we have china, we have housewares, jewelry," she said. As a nonprofit, Hartmann said the thrift shop will use revenues to help girls and women.

While new businesses have opened on neighboring Whiskey Row and other downtown streets, Kishore Patel decided not to reopen the Prescott Food Store, which the fire destroyed.

"There was no space available" downtown, said Deborah Butitta, broker for Carrera.

Butitta said she sold to Patel the building at 7465 E. 1st St. in Prescott Valley that the Stepping Stones Agencies rented to operate a thrift shop, adding he plans to open a grocery store at the location. Stepping Stones will remain open for business until Monday, and will consolidate the merchandise at its red barn on 1st Street and clothing outlet on 2nd Street, Chief Executive Officer Robin Burke said.

However, Patel was not definite about his plans, saying he isn't sure whether he will open a grocery or lease the building instead.