Birds - and snakes - are out in force 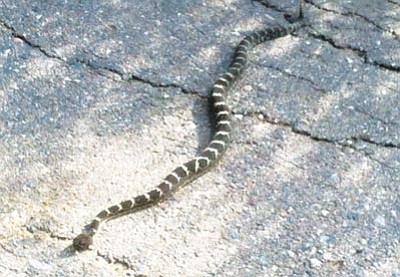 Last month I wrote a column about the importance of being observant. This past week I had another experience that drove home this point.

As I was carrying out some birdseed to a customer's car, I noticed up high in the sky two large black birds - bigger than ravens. Knowing that turkey vultures and zone-tailed hawks can look an awful lot alike in flight, I ran into the store and grabbed a pair of binoculars and ran back outside to get a better look.

The two birds that I initially saw became three, then four, then five. It seemed that other birds wanted to get in on the action and enjoy the same thermal. Looking through the binoculars, I could tell that four of the large black birds were turkey vultures. However, one of the birds was lighter in color - a red-tailed hawk was circling right in the middle of the vultures.

At this point I was losing sight of the birds as the front of the building was blocking my view, so I ran through the front of the store and out the back door to see if I could get a better look. When I got outside, I found another large black bird flying low between the Pioneer Cemetery and the parking lot. I got my binoculars on the bird and discovered that it was a juvenile zone-tailed hawk!

The moral of the story is to check out even common birds that you are seeing. Don't assume that you are seeing 'just another' turkey vulture. By being diligent, I had one of those "aha moments" where I was able to see both red-tailed hawk and zone-tailed hawk, which I could have easily missed if I had dismissed those large black birds as vultures or ravens.

On Monday, I hiked the Thumb Butte trail. I did not see the peregrine falcons that I saw last week, but there were several white-throated swifts flying - should I say "swiftly" - around the top of Thumb Butte, gleaning for insects.

On my hike, I had two exciting discoveries on the trail, literally. One was a baby horned lizard - it could not have been more than a few weeks old, it was so adorable! The second discovery was a beautiful Arizona black rattlesnake stretched right across the trail!

Arizona black rattlesnakes are so pretty - they are very dark and have a diamond-backed appearance, with the diamonds being a rich yellow color. I used my iPhone to take several pictures of the snake, which I will download onto the Jay's Bird Barn Facebook page.

I got as close to the snake as I felt safe, thinking it would slither off to the side of the trail, but it had no intentions of leaving the warmth of the paved trail. I literally had to leave the trail and go up and around the banking, as it would not move.

This past Saturday I was hiked the Constellation Trail off highway 89 by the Phippen Museum, and I flushed up a common poorwill! That was an exciting find, and became species number 201 for my 2012 state list. I also saw a great horned owl and witnessed it coughing up a pellet! I love being in nature.

Until next week, happy birding!

Eric M. Moore is the owner of Jay's Bird Barn, with two locations to serve northern Arizona-1046 Willow Creek Road in Prescott, and 2360 State Highway 89A in Sedona. Eric has been an avid birder for over 45 years. If you have specific questions related to wild birds which you would like discussed in future articles, email Eric at eric@jays birdbarn.com.

Moore: Fireworks in the forest on the Fourth of July
Zone-tailed hawk and turkey vultures are very similar
Be on the lookout for zone-tailed hawks
Birding in the Wickenburg area
Moore: Birding at Date Creek Ranch