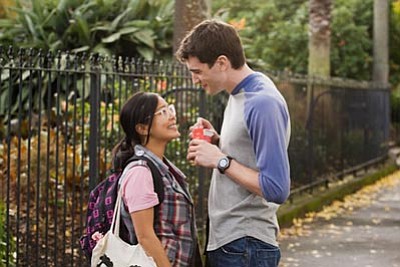 Courtesy photo<br> “My Wedding and Other Secrets” is the story of overachiever Emily Chu whose ambitions change when she meets and falls in love with James.

"Moving Boxes" is the story of a man who goes to extreme measures to capture the attention of the women he loves as they pass each day in the elevator at work, Gregg said. The 20-minute film is based on an original screenplay by Dave Jenkins and was produced and directed by Gregg.

The film shines a spotlight on Prescott-area and its talent.

But, the cast includes a host of Prescott actors, as well, including Andrew McFadden, who plays a FedEx delivery man, and background extras Jim Anderson, Parker Anderson, Larry Chezniak, Arnold Corella, Jared Haxton, Kathy McFadden, Stephany Powell, Hannah Rothwell and Jenel Taylor. Jean Lippincott, who is active in the Prescott Center for the Arts, did the actors' hair and makeup. Forrest Sandefer, who has worked on several Hollywood productions, was the film's director of photography.

Charlie Smith, the associate producer, is from Chino Valley. Jayme Salazar, owner of Taco Don's in Prescott, contributed his voice-over talent and played the radio DJ character during the opening sequence of the film.

"Judy Conner from the Apache Lodge allowed us to shoot the bedroom/bathroom scenes in two of the lodge's rooms," Gregg said.

Helen Stephenson, director of the Prescott Film Festival, introduced Gregg to Dino Bulleri and Judy Brewer of the Bulleri Professional Building in downtown Prescott, and they agreed to let the crew use the entire building on a Sunday for the film's elevator and office scenes.

"We wrapped at the Bulleri building after 22 hours of shooting," Gregg said, adding he "can't say enough great things about how Dino and Judy helped us make this film a reality. We owe them big time."

When that work was done, Gregg, a 12-year resident, and his staff spent four days editing their work and completed the film just in time for the Prescott Film Festival showing.

Gregg will be on hand for a question-and-answer session after the screenings.

"My Wedding and Other Secrets" is the film festival's second offering for Wednesday evening.

The film is a contemporary story of Chinese New Zealand-born overachiever Emily Chu, who was raised to believe she can get anything she puts her mind to - even if "anything" is at odds with her traditional Hong Kong-born parents who want her to become a doctor like her two sisters.