Days Past: Prescott courthouse plaza nearly sold off in 1867 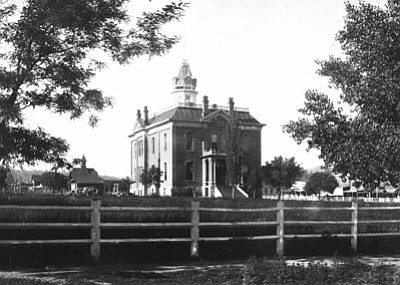 Sharlot Hall Museum/ Courtesy photo<br> The first Yavapai County Courthouse, photographed circa 1880, was built after some legal wrangling and a final decision to keep the plaza for public use instead of parceling it out as lots for building.

Those of us who love our plaza -lunching under the trees, enjoying the beautiful Christmas lights, or just looking at it as we drive by - may be shocked to know how close it came to being lost.

On May 30, 1864, a meeting took place at the store of Don Manuel Yrissari on Granite Creek near the present Prescott Mile High Middle School for the purpose of adopting the best method for selling of lots in the proposed town.

A recent Act of Congress had made it the duty of the president to reserve town sites from the public lands. The secretary of the Interior was to order the surveying of these town sites and to offer lots at public sale to the highest bidder. Considering the distance and lack of mail facilities, those at the meeting considered it too time consuming to attempt to communicate with the president and, instead, appointed Robert Groom and two others at the meeting to lay out and sell lots. Their first offering to the public on Montezuma, Gurley, Cortez and Goodwin streets (but not on the plaza itself) was highly successful - and highly illegal. Robert Groom had laid out the town the way he would like a town to be: wide streets and a large plaza-twice or more larger than most eastern town squares. And the streets! Seventy-five feet wide - five times what was needed for two horse-drawn carriages to pass one another and wider today than those of most towns (have you been to downtown Flagstaff?).

But the plaza! Too big and useless - "a playground for dogs, goats, and other animals." Of course, at that time there wasn't any courthouse there. Most of the beautiful trees had been cut down for firewood. Many felt it too big and of no use, right in the center of the business part of town and that it should be laid off in lots and the lots built upon.

The filing problem had been apparent and unsettling to some in Prescott for a while and it had to do with the initial disposition and sale of lots. At this time, there was concern that someone might take advantage of the situation. H. W. Ward and friends did just that!

On March 13, 1867, merchants opening their stores in the morning were shocked to see a fence being erected around one half of the plaza fronting on Montezuma Street. The day before, they discovered, H. W. Ward had filed a claim for half of the plaza. Others, on the same day filed for a plot on the northeast corner. Sadly, and surprisingly, their claims were not blatantly illegal.

The outrage was immediate. Even those who had formerly liked the idea of lots being purchased for business purposes on the plaza did not like the idea of a stranger coming in and doing exactly that. A public hearing was held and Levi Bashford of the New Store on Gurley Street (now the Prescott Brewing Company), and John Campbell of Montezuma Street's Campbell & Buffum's mercantile (mid-Whiskey Row) filed suit against Ward. They were supported by George Soule of the "Snug" Saloon (in the center lot of today's Palace Bar), Cal Jackson from his saloon (now the Arts Prescott Gallery), John Littig from "Cheap John's" store (near the south end of Whiskey Row), and Casper Schroeder from his bakery (near today's recently burned out Bird Cage Saloon).

They asked for an injunction, stating that the only irregularity was that the commissioners were selected by the citizens of Prescott instead of being appointed by the secretary of the Interior, as was the law. The businessmen alleged that building houses on the plaza would decrease their property values and, besides, the plaza had been originally "surveyed, laid off and appropriated to public use to be enjoyed in common by the citizens of said town as a public plaza."

The merchants' injunction was accepted and a jury ruled against Ward. He was ordered off the plaza, it was saved and in the center, a handsome and charming courthouse was built in 1878. The following year, a white fence was put up to keep out the livestock, which roamed the area at will.

Other improvements followed: trees, grass and cacti were planted; a crop of watermelons was cultivated to treat the citizens on warm summer evenings; a chapel, bandstand and gravel walkways installed. Our treasured plaza was saved for all of us to enjoy.

(Reprinted from a 1977 Days Past article)