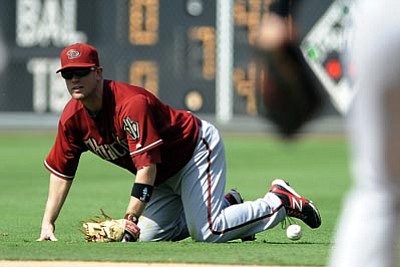 Michael Perez/The Associated Press<br> Arizona Diamondbacks' Aaron Hill drops the ball and cannot make the play to Paul Goldschmidt at first base in the eighth inning of Sunday's game against the Phillies in Philadelphia. The Phillies won 5-4.

That's how the Arizona Diamondbacks felt after Ryan Howard's bases-loaded single in the ninth inning lifted the Philadelphia Phillies to a 5-4 victory on Sunday.

Chris Johnson continued his hot streak with a homer for Arizona, which also got homers from Stephen Drew and Paul Goldschmidt. The Diamondbacks led 4-3 entering the bottom of the eighth, but the Phillies tied it in the eighth after getting three hits that didn't leave the infield.

With John Mayberry Jr. on second after an infield single and wild pitch, Domonic Brown lined a ball off right-handed reliever David Hernandez. The ball ricocheted toward first base, but Hernandez's flip to first hit Brown and got away from Goldschmidt at first.

Mayberry raced home from third and just beat Goldschmidt's throw to tie it at 4.

"I thought he was out at the plate but it doesn't matter," Arizona manager Kirk Gibson said. "They had an opportunity and cashed in."

Diamondbacks catcher Henry Blanco left the game after the Phillies' run, apparently with a thumb injury.

Howard capped the Phillies' comeback in the ninth.

Pinch-hitter Juan Pierre led off with a single to center off Josh Collmenter (3-3), moved to second on Nate Schierholtz's sacrifice bunt and went to third on pinch-hitter Laynce Nix's single to right that went off the glove of a charging Upton.

"I thought I had the ball when it hit the ground," Upton said. "It just popped out."

Collmenter intentionally walked Chase Utley to load the bases with one out for Howard. The Phillies slugger missed most of the season with a left Achilles' injury and has struggled this season.

He was loudly booed after striking out in the eighth, his third of the game, but made up for it with a clean single to right to pull the Phillies out of last place in the NL East.

"Howard just elevated the ball," Gibson said. "It's baseball. Sometimes you wonder why, but things happen."

Trevor Cahill gave the Diamondbacks a strong start, allowing three runs on six hits in seven innings while striking out six and walking two. He left with Arizona ahead.

"That was a tough loss, just one of those things," Cahill said. "I felt pretty good. I was just trying to throw strikes. I was able to get quick outs later in the game. We just have to forget about this and start over tomorrow."

Said Gibson, "They outexecuted us when it counted. They put pressure on us all day. It's frustrating but you just get over it and come back tomorrow."

Howard batted with the bases loaded and one out after going five for his previous last 35 with 20 strikeouts.

But the big lefty helped Philadelphia win its eighth series in nine tries at home against Arizona since Citizens Bank Park opened in 2004, and pulled the Phillies out of last place in the NL East.

"That's a big hit," Philadelphia manager Charlie Manuel said. "When he went up there, I said that the pitcher was the one in trouble."

Phillies closer Jonathan Papelbon (3-4) entered in a tie game and pitched a scoreless ninth, stranding the go-ahead run on secnd.

Collmenter was the fourth pitcher used by Arizona.

Utley homered for the Phillies and said the game-winning RBI can help Howard find his groove.

"Anytime you get a big hit to win the game it's going to build your confidence," Utley said. "Ryan is a going to be all right. He's a competitor and a hard worker. He'll be just fine."

Said Howard, "It feels good. I'll just try and build on it."

Philadelphia starter Cliff Lee remained winless at home this season, getting no decision after giving up four runs on eight hits in eight innings with five strikeouts and no walks. Lee is 2-6 on the season and 0-4 with a 4.53 ERA in eight home starts this year.

The Diamondbacks took a 3-0 lead in the second on homers by Johnson, a two-run shot to left, and Drew. Drew's homer to center just cleared the wall and the outstretched reach of center fielder Mayberry, who nearly lost his glove when his arm hit the top of the wall and deflected it off his hand.

Philadelphia got a pair of runs back in the bottom of the frame, with Mayberry scoring on Cahill's wild pitch and Erik Kratz's RBI double. Kratz, who is filling in for injured starter Carlos Ruiz,.

Utley tied it at 3 in the fifth with a solo homer to right, but Goldschmidt hit a leadoff homer in the sixth to put Arizona up 4-3. Goldschmidt is batting .462 (12-for-26) with three homers and eight RBIs in his last seven games.

Johnson is batting .381 (8-for-21) with three homers and 10 RBIs in the six games since Arizona acquired him from Houston.

Notes: The Phillies held a moment of silence before the game for Garrett Reid, the son of Eagles coach Andy Reid who was found dead in his Lehigh dorm room on Sunday morning while assisting the team in training camp. . Arizona CF Chris Young moved into second place on the club's all-time games played list by playing in his 850th contest with the Diamondbacks. . Arizona opens a four-game series at Pittsburgh at 7:05 today, with Diamondbacks LHP Wade Miley (12-6, 2.98) scheduled to face Pirates LHP Erik Bedard (5-12, 4.83). Philadelphia opens three-game series at home Monday against Atlanta, with Phillies RHP Vance Worley (6-6, 3.63) scheduled to oppose Braves RHP Ben Sheets (3-1, 1.46).