Once upon a time in the West... Prescott was the original cowboy moviemaking capital 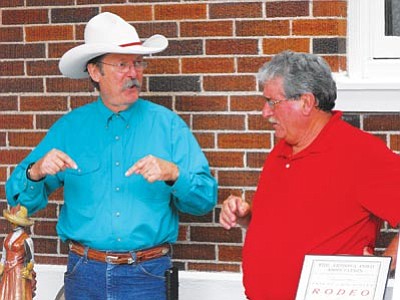 PRESCOTT - The Hollywood Western film may have grown up in Tucson and its environs, but Saturday's History Meets Hollywood event was a reminder that it was born and bred in Prescott.

"Old Tucson Studio is significant," said organizer Rob Bandhauer, "but most of those, 'Rio Bravo' and those ones, those were done in the 1940s and '50s. (But) Prescott played the original, formative role.

"It all started here," he said.

The day-long conference at the Hassayampa Inn featured speakers, films and a silent auction of Western memorabilia.

Among the press kits for "Junior Bonner" and the John Wayne biographies was a movie poster for "Kingdom of the Spiders," a 1977 film about giant tarantulas attacking the Verde Valley - they were fended off by none other than Captain Kirk himself, William Shatner.

Well, it was filmed in the West, anyway.

Western movie history is filled with ironies, like the story of Wyatt Earp. Show co-host Bob Boze Bell explained Earp's film background. "He ended up in Hollywood, where he tried to tell his story, but he couldn't sell it, and he died not being able to sell it," said Bell. "Now, it's one of the most legendary stories in Western lore, and there's been over 30 movies made (about him)."

He didn't know how to sell himself, Bell added. "Everybody thought he had a dumb name."

Silent films played during the conference, with Tom Mix and his buddies shooting it up, and local film historian Tom Slaback setting the record straight about some of the exaggerations that Mix and the studio made public.

There was a bit of symmetry this weekend, with the fifth annual Wild West History Association Roundup also taking place at the Prescott Resort.

"That's what got most of us started," said Pam Potter, president of the Wild West History Association. "Most of us got started on Hoppy, Gene and Roy. That's how most of us got interested in this stuff.

"We would like to be the go-to organization for the people doing documentaries," she said. "Even if they're going to fictionalize it, (filmmakers) need the basis for the story, and they can get that from our members."

Bandhauer said he also wanted to capitalize on the fact that the Prescott Film Festival was going on simultaneously over at Yavapai College to try to re-energize the film industry here. "My motivation has been to bring these two very important groups together, with the outcome that we can do more Western films," he said.