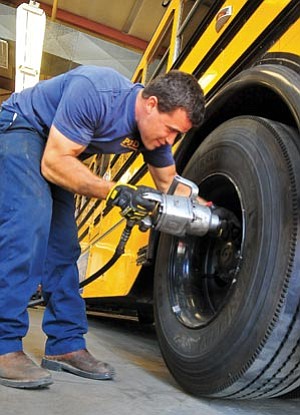 Matt Hinshaw/The Daily Courier<br> Rex Pehl, a Prescott Unified School District vehicle mechanic, changes a tire on a school bus Wednesday afternoon at the PUSD transportaion yard in Prescott. The first day of school for PUSD will be Monday, Aug. 6.

Originally Published: August 3, 2012 10:03 p.m.
Tweet
Parents of Prescott Unified School District students who ride the bus will notice some route changes, but the biggest change students will notice is that the bus number now matches the route number."Before, Route 1 was actually on Bus 17, we've clarified that so that now Route 17 will be in Bus 17," said Norma Frye, PUSD transportation director. "It's just going to make it easier for the schools to see the buses coming in and know what route they're on."For the past week, PUSD bus drivers took part in in-services, learning a new positive discipline system, discussing taking part in community events, preparing for the first day of school (Monday, Aug. 6), and getting ready for more training after school starts.Over the summer, the department looked at the school bus routes and use to determine how to improve service, Frye said.As a result, two of last year's bus routes were eliminated because they had a small number of students on them. Frye said they were incorporated into other routes this year. Employees also discussed taking part in community events with local agencies including a coat drive in September, a food drive in November, and a gift drive in December, Frye said.To cut down on student conduct reports, Frye said, bus drivers will be using a positive discipline system this year where they talk to students one-on-one privately and with respect about the expectations for their behavior on the bus.Bus drivers expressed concerns that other drivers are not stopping when the bus has its stop sign out at bus stops, Frye said.When a bus stops with its lights on and the stop arm out, traffic in both directions must stop until the bus turns off its lights, Prescott Police Lt. Ken Morley said, noting that failure to do so could lead to a $493 fine."Kids are kids, they're excited at the end of the school day and may not be paying attention," Morley said. "It's the responsibility of motor vehicle operators to look out for kids who can lose focus."Only if a physical barrier is present - such as a fence, curbing or a separation of the pavement dividing the street - can traffic in the opposite direction continue to proceed, according to the Arizona Drivers License Manual.Drivers also expressed concern about their buses getting cut off, Frye said."School buses are not fast vehicles," Frye said. "People may not want to drive behind us, but we can't stop quickly if they cut in front of us. Children in the buses could get hurt if drivers have to stop very quickly."The Police Department's two main concerns are speeding in school zones and passing a vehicle in a school zone, Morley said."The speed limit in school zones is 15 miles per hour or less from the point of the first school zone sign to the end of the last school zone sign," said Morley, noting the fine for speeding in a school zone is $653. If someone driving through a school zone is going 10 mph, Morley said you cannot pass them even if you are going under 15 mph.At regular crosswalks, drivers can proceed once a person leaves their direction of traffic, but it doesn't work that way in school zones. "Anyone in a school zone crosswalk is entitled to both directions of traffic stopping, not half of it," Morley said. "Once walkers clear the second lane of traffic and are on the curb, then drivers can proceed."Drivers who fail to stop until the pedestrian is on the other curb, could face a $653 fine, said Sgt. Corey Kasun, traffic section supervisor.With school starting soon, officers will increase patrols and enforcement in school zones during drop off and pick up hours as well as during lunchtime, Kasun said. "We would like to remind the public to simply slow down and pay more attention around school zones," Kasun said. "It is very easy to become distracted with cell phones and such. We ask that motorist take extra precautions, especially while driving around our schools to help insure the safety of our students."Officers will also be doing added patrols along bus routes to help ensure that safety of children boarding and unloading, Kasun said.Also, if school bus drivers see someone fail to yield they can forward the information about the incident, the driver, and the location to police, and an officer may issue a citation, Morley said. Click here to view 2012-13 School Bus Route Schedules
Contact
Sign up for Courier e-News Alerts
Most Read
7 days
30 days