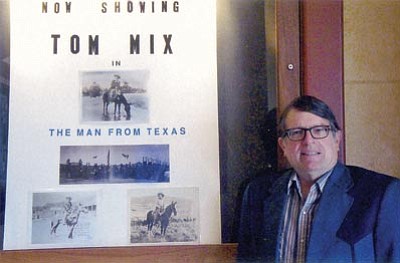 Western movie buffs will be able to feed their passion Saturday - and find out about Prescott's prominent role in film history - during "History Meets Hollywood" at the Hassayampa Inn.

The public is welcome to attend the 11 a.m. to 4 p.m. event, featuring Prescott film historian Tom Slaback, state historian Marshall Trimble and Michael Blake, who wrote the screenplay for "Dances with Wolves." Authors Bob Boze Bell and Ross Kapstein will be on hand to sign their books about western lore.

Slaback immersed himself in film history in the late 1980s when, as a member of the Sierra Club, he became involved in the controversy surrounding the proposal to build a four-lane highway and a suspension bridge across Oak Creek at the Red Rock Crossing in Sedona - "the most iconic view we have in the state," he said.

He recalled an article that appeared in the late 1950s in Arizona Highways magazine by Bob Bradshaw called, "They Still Go This Way and That A-Way in the Red Rock Country." This story, Slaback said, detailed all the movies made in the Sedona area dating back to 1945 that Bradshaw had worked on. Slaback decided to pick it up from there and research movies that were shot in that location in the years following the Arizona Highways piece.

Slaback wanted to use this information - that movie productions bring a lot of money to town - as ammunition against building the suspension bridge.

He discovered a treasure trove in his exploration. Beyond movies that had been made in every city in the county, Slaback discovered that the greatest number were filmed in Prescott.

"I got hooked and started researching the movie industry in Prescott," he said. At first, mining the film industry's past was slow going, Slaback said, but the advent of the internet was "tremendous, especially eBay that had photos with identifiable scenery," he said, adding he also attends film festivals and auctions and has talked to stars, directors, writers and producers to amass the movie memorabilia and information he has collected.

Coincidentally, 2012 marks the 100th anniversary of Arizona statehood and the establishment of the movie industry in Prescott, as well.

The first movie studio, the Lubin Film Company, started up in 1912, and a second film company, Selig, opened in 1913. Much would follow in years to come, which Slaback will talk about in his Saturday presentation.

For instance, Tex Ritter made four movies here with his wife, Dorothy Fay Southworth, a Prescott native and the daughter of medical doctor Harry T. Southworth. "Selig made a star out of Ritter," Slaback said. "He was an unknown, a bit player, who had played Indians, villains and Mexicans."

"Leave Her to Heaven," starring Gene Tierney, who was nominated for an Academy Award for best actress, was filmed in Prescott and did win an Oscar for best color cinematography.

Other films of note include "Junior Bonner," "How the West Was Won," "Bless the Beasts and Children" and more.

Slaback's presentation will begin at 12:30 p.m. with a talk about "How the Movies Got to Prescott," and will include a showing of "The Law and the Outlaw," starring Tom Mix, whose name is steeped in Prescott film history. In this move, which was filmed in Granite Dells, Mix is the outlaw.

"History Meets Hollywood" coincides with Prescott Film Festival 2012, which runs through Aug. 8, with screenings at the Yavapai College Performing Arts Center. For more information about "History Meets Hollywood," visit info@historymeetshollywood.com. The day offers a no-host lunch and bar refreshments throughout the event.

And, the 5th annual Wild West History Association Roundup is taking place at the Prescott Resort. Friday and Saturday's schedules include many presentations on the spectrum of events in history of the West. Its schedule is available by logging onto www.wildwesthistory.org.

That "Hollywood Meets the West" and the Wild West History Association would gather at the same time in Prescott brings two organizations together to share the history of film in Prescott with historical scholars, said Rob Bandhauer of the Bandhauer Group, presenter of "Hollywood Meets the West." He also does marketing for the Wild West History Association. Some of the speakers are appearing at both venues.

"I want to bring historians of the West together with those who love and appreciate Yavapai County's role in the film industry in conjunction with the Prescott Film Festival," he said, adding that the weekend festivities are especially appropriate during Arizona's centennial celebration.