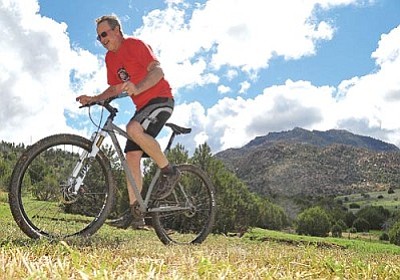 Matt Hinshaw/The Daily Courier<br /><br /><!-- 1upcrlf2 -->Chris Carothers gets a quick practice ride in near his home in Williamson Valley Thursday afternoon. Carothers will be riding in the Whiskey Off-Road amateur class this year.

Carothers' seventh place finish in the men's masters 45-plus age division would've won the year prior when he placed fifth with a time that was 20 minutes and 10.76 seconds slower.

"One of the coolest things about cycling is that you can absolutely see your progress," Carothers said Thursday afternoon, sitting at the dining room table of his Williamson Valley home.

"Want to see my road bike?" he asked, dashing into one of his sons' bedrooms, which he uses as a "bike room."

Carothers, 50, recently finished El Tour De Tucson, a 111-mile race, though he doesn't consider it in the same category as his choice of race Saturday, the Whiskey Off-Road 50-mile race.

It's nearly double the weight, with much, much thicker tires.

Carothers can get tech-y about cycling today. If you'd have asked him five years ago, though, he couldn't have told you much about the sport, let alone identified the GU Energy Gel packs he plans to consume at strategic intervals throughout the race by their glossy packaging alone.

"Five years ago, I was getting a little heavy and had high blood pressure," said Carothers, a self-employed contractor. "Cycling changed everything. I lost 40 pounds and my blood pressure went down."

It started with a bike his older brother Steve gave him several years ago. At first he barely made it to the top of a hill about half a mile from his house.

Now, Carothers cycles 12-13 miles nearly every afternoon on a scenic loop near his house.

"Cycling - it's my back yard, and it's every day," he said earlier that Thursday, grinning atop the fixed-speed bike he got for training three months ago.

"A buddy told me you need to be motivated, so I signed up for my first race maybe four years ago," he said. "I'm not riding for exercise any more. I'm riding to train."

He's also taken up jogging for cross-training purposes, and is signed up for the San Francisco half-marathon in a matter of weeks.

"I can't wait for it to be done. I was just talking to my wife about this," Carothers said with a hearty laugh. "With cycling, I can go out, it's my reset button, and I'm back at the house and it's, 'Oh, that was wonderful, maybe I'll go do it again.' With jogging, it's, 'When. Is this. Going to be. Done."

He's got support though, both from his bike guru, Marc Hanses, of Prescott Valley Bike Works, and his training partner, Bill O'Leary, a Prescott transplant and tri-athlete.

"I was worried about the Whiskey 50 until last weekend, when I finished in under five hours," Carothers said, referencing a Saturday trial run.

He's got some avid fans, too, as evidenced by a pair of poster boards in another room with his medals and event flyers. The fluorescent pink one says "GO" and the fluorescent green one says "DAD" and has a bicycle drawn on it.

"Those are from last year. My daughters, they surprised me at the top of Copper Basin," Carothers said. "I got goose bumps."

For now he's the only one in his family who cycles. Maybe, he mused, his four children will take it up later in life.

"You know, like I did," Carothers said. "One of my sons is coming back from Denver soon. Maybe I'll get him interested in it."