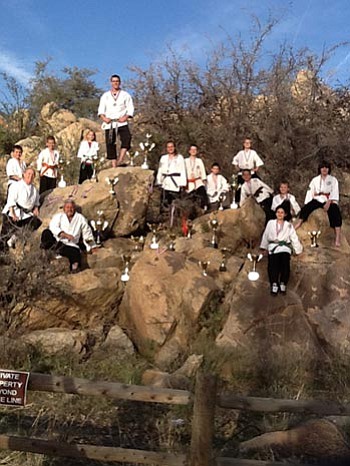 The total number of placings for the team was 38, with 28 of those being in top 3.

Students attended extra practices weekly for two months to prepare for this competition. Numerous fundraisers helped to ensure that every student was able to attend this prestigious event. Parents and students alike would like to express their heartfelt gratitude to the community for their generous contributions and sponsorships. All of the qualified students were able to attend thanks to the many folks and clubs that helped make this happen. Students also held a Kick-A-Thon to raise the funds for this event and were able to donate $170 to the Yavapai-Prescott Valley Food bank as their way of giving back to their Community.

There are eight different events for contenders to compete in not including the Grand Champion Events.

This year was extra special for Shihan Alex as he had the honor of performing in a demonstration for the Nationals audience with the student of Master Fumio Demura - 9th dan of Shito Ryu - The real Mr. Miyagi. The performance was a weapons attack and defense demonstration that had the audience on the edge of their seats.

Please visit dCourier.com for a photo of the team.