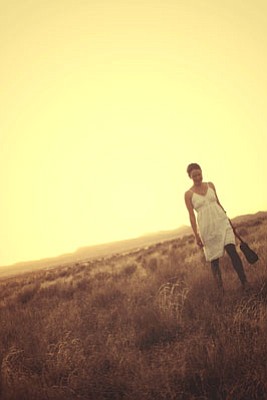 Call it a concert, if you'd like, but it's also a re-imagining.

The influence for the record, her second, and the show, which doubles as her senior project at Prescott College, is a lifetime of arts funneled through her seven months in Europe in 2011.

"It's like a desert bloom, a one-night-only thing that includes all of these different aspects," McNamara said.

The Virginia native, originally a pianist and, later, a banjoist, came to Prescott for college in 2006, left to pursue a music career, came back, left again, and came back again in 2012.

Her project, "Right Livelihood in the Arts," marks the end of her boomeranging, at least for now.

"After touring seven months in Europe, it was, 'Ughhhhhh, what am I doing?" McNamara said.

The multi-instrumentalist likes to go to bed early and has a number of food sensitivities - habits and circumstances less than compatible with the life of a gypsy musician.

"Some students come in and know exactly what they're going to do and just go for it," said Liz Faller, McNamara's faculty mentor and Prescott College professor. "Some students, for them it's a real process of discovery, an ongoing development of ideas."

Philosophies and lifestyles aren't the only muses with McNamara's ear.

Her project, first and foremost, draws its narrative from her personal life during her recent stint abroad. "Daphne's Nest" and, in part, "Right Livelihood in the Arts," tell the story of her whirlwind romance with a Frenchman.

"It starts with the gushy, love-y feeling, matures into faith and trust and joy, and then gets turned into resentment and then full-blown depression," McNamara said in a dramatic voice topped by a hearty laugh.

With those demons exorcised, she's set to graduate, work at the local farmers market and continue giving piano lessons and performing solo gigs in Prescott.

"I'm finding ways to support myself and be part of a community where I have my friends," McNamara said, pausing for a moment. "I'll probably tour in the fall, though. I can't resist that."

McNamara awoke one morning in mid-2011 with acute desire: she needed a ukulele.

When you're living in a remote sanctuary in the Pyrenees mountains, the family retreat of your French boyfriend, just ask and your wish will be granted.

"I call it the Garden of Eden because nothing was expected of me there," McNamara said. "I'd sit in the garden, eat apples and write songs."

Stateside, in November, her brother offered to record her second record as her tryst fell from the sky.

"Right around this time, I decided to come back to Arizona, and I stepped backward on the ukulele and broke it," McNamara said. "I recorded the whole album on that broken ukulele. There's something poetic about that, like I stepped on it and the spell was broken - ohh, I should have put that in the booklet."

Her personal journey was also influenced by another garden of sorts, one she encountered at Granite Creek, in Prescott, years prior.

"'Women's Wisdom and Nature' was a class I took with Liz Faller," McNamara said. "We'd go outside and connect with the earth and elements, and it's where I really got in touch with my feelings before I left the first time."

Many students have epiphanies in that class, but Faller said McNamara's stood out.

"We sing in that class, and once she started singing we asked her to sing more because, wow, it was good, and that's where she found her voice," said Faller, who, in addition to her role as a professor, is excited to see the show as a patron.

"We have a lot of interdisciplinary students, and every senior project is memorable and distinct, but the combination of her Appalachian and classical roots, her perspective and her holistic approach are amazing," Faller said. "And when she's onstage, she truly shines."