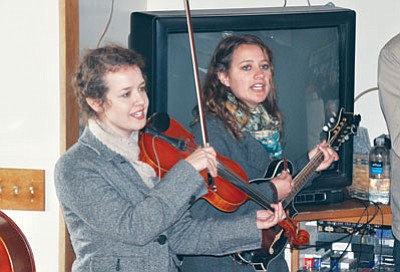 The second annual Hi-Country Bluegrass Festival failed to reach its potential because of the weather, but organizers and Arcosanti pulled together to give those who braved the elements a great experience.

Arizona Highway 69 Chamber member and volunteer Jerry Schultz said all of the bands who came Saturday complimented the venue and said they wanted to return next year. Schultz said the Chamber has talked about a tentative date of May 4 in 2013, a little later to hopefully dodge late spring storms.

The festival opened at 10 with invocation by Pastor Lloyd Yarbrough of Calvary Bible Church in Mayer, posting of the colors by Cordes Lakes American Legion Post 122, singing of the National Anthem by Heidi Dahms Foster, and welcomes by Mayer Justice of the Peace Bill Rummer and County Supervisor Tom Thurman. Longtime festival organizer and musician Ben Sandoval emceed the event.

The popular local Potato Patch Band, made up of Ellen Tyler Mackall, Howard Mathews, Louis Mackall and Max Hawkin, was the only band to play on the Colly Soleri Music Center stage before the rain and wind drove everyone inside. Arcosanti staff moved the concert into the warm Green Room behind the stage, and while everyone was packed in tightly, they were enthusiastic and cheerful as they listened to Run Boy Run, an acoustic bluegrass and folk band.

The concert later moved into the Arcosanti cafeteria, which provided a little more room, but as more people who had bought advance tickets showed up despite the weather, that became crowded, too. The easy-going crowd packed themselves in and enjoyed an afternoon of music by The Back Porch Bandits, Burnett Family Bluegrass, Traditional Bluegrass, and Jam Pak bands.