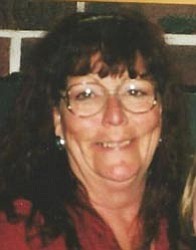 Prescott native Grace Louise Terry (Glover), born on April 3, 1949, took her father's hand on April 14, 2012, to join him in their eternal journey through our maker's mountains.

Services will be a private family affair.

Hampton Funeral Home was entrusted with the arrangements. Her family requests that anyone wishing to pay their condolences or sympathies do so by contributing to their local charity of choice. Please visit www.hamptonfuneralhome.com to sign Grace's guestbook.