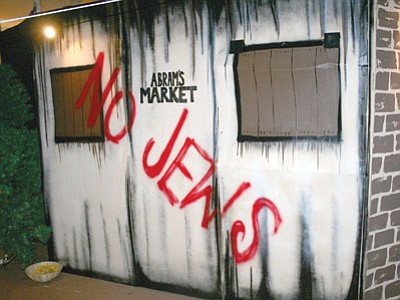 Eighth-graders at Bradshaw Mountain Middle School will present a 10-minute walking tour through the history of the Holocaust, including this early depiction of political discrimination against Jewish business owners.<br> Trib Photo/Sue Tone

The door opens to a Polish village and a pathway that passes Schmidt's Bakery and a jewelry shop. Around the corner through a forest, you enter a ghetto where a trunk provides a hiding place from Nazi soldiers. Too soon, the SS capture you and close the doors of a crowded boxcar while railroad bells clang in the darkness on its way to the Auschwitz concentration camp.

Welcome to the Living History Holocaust experience at Bradshaw Mountain Middle School. It is not for the faint-hearted, nor young children, said Anne Weingartner, BMMS eighth-grade language arts and AVID teacher.

The 10-minute tour is open to students and the public - Weingartner recommends parents bring middle school-aged and older children - for three days next week: Monday with tours at 8:30 and 9 a.m. and noon, Tuesday at noon, and Wednesday at 8:30 a.m.

The museum is a group effort by the school's eighth-graders, Hope's Attic, Melcher's Printing, Dewey Door Doctor, Adjust to Health, and Weingartner's daughter and husband, Jena Duncan and Jim Weingartner, who designed and created the sets.

Weingartner said her students ended their Holocaust unit with the museum and a 12-paragraph research paper in which they analyzed, predicted, and looked "deeply" into the reasoning behind the history of the struggles of European Jews during World War II. Students also compared those years to the Japanese-American internment camps in the U.S. and more recent events in Darfur.

Weingartner said she got the idea for the museum from a trip to the National Holocaust Museum in Washington, D.C., several years ago.

"It was life changing. It was very disturbing for those of us who aren't racist to believe people did that," she said. "Only 2 percent made it out of the death camps alive."

Those who take the walk through the museum will wear a "passport" around their neck that contains a photo and life story of an actual person. Some survived, some did not.

"We will be sensitive to participants as different ages bring different reactions," Weingartner said, adding that parents might want to speak to their children about the Holocaust before taking them through. The experience is as realistic as can be, but should not be compared to a Halloween haunted house event, she said.