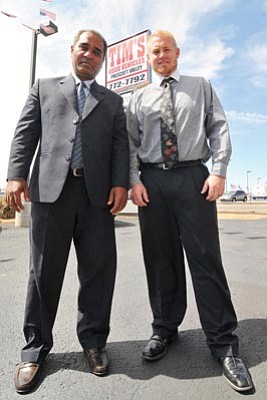 Tim's Auto Group is back in town. The prominent Prescott dealership reopened its used car lot here on Monday after it sat dormant for about a year.

"I want to sell good cars in this area and that's why we're doing this," said Ali Hussain, general manager of Tim's Auto Group in Prescott.

Hussain is bullish about the family-owned car dealer that opened in Prescott in 1983 and on the local economy, citing more single-family new home permits, low interest rates and folks looking to get rid of their older cars for newer models with fewer miles.

"I think us coming back and coming back the right way is going to help us sell more cars," he said of the Prescott Valley lot.

In the summer of 2008, Tim Coury opened his new Toyota dealership building in Prescott and bought the Subaru franchise from car dealer Ted Lamb. Earlier this year, Hussain announced plans to give the neighboring General Motors building a facelift.

In Prescott Valley, a sales manager, a finance manager and a team of four or five sales executives with a selection of more than 60 cars ranging from sedans and minivans to trucks and SUVs are ready to serve customers, Hussain said, adding that the goal is to sell 40 to 60 certified used cars a month.

Certified vehicles have 125,000 miles or less, get a thorough inspection and get a one-month, 1,000-mile warranty, Hussain said.

Aging vehicles are one of the reasons the National Automobile Dealers Association shares Hussain's optimism.

Paul Taylor, chief economist for the association, says affordable credit and aggressive incentives account for his sales forecast of nearly 14 million new car and light truck purchases or leases in 2012.

On the credit side of the coin, Taylor said interest rates on new car loans will remain low this year and that means affordable credit. "With the age of cars and trucks on the road today at nearly 11 years, consumers can no longer delay making a purchase of a new or newer vehicle," he said in a news release.

Hussain also pointed out that the Town of Prescott Valley stands to benefit from auto sales. Financial data shows the importance of the automobile sector in Prescott Valley, according to town officials. The sector, which includes new and used car dealers, auto repair businesses, tire stores and other retailers selling auto parts and accessories, generated more than $437 million in fiscal year 2010-11. That means the local sector accounted for about $40 million in sales taxes this past fiscal year.