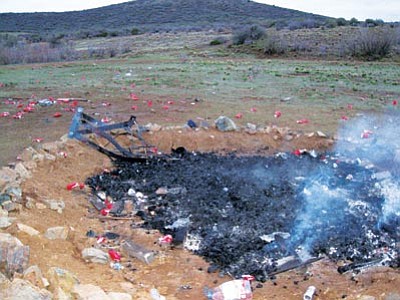 YCSO/Courtesy photo<br> Plastic cups and beer cans litter the scene of a Saturday night after-prom party attended by more than 150 high-school-age students. Sixty-five of the participants, all under 21 and some as young as 15, were detained.

At about 3:45 a.m., deputies were called to an area 6 miles from Highway 69 on Iron King in response to a report of a male lying in the roadway, said YCSO spokesman Dwight D'Evelyn, adding that they found him in the road "in an extremely intoxicated condition." Nearby, the officers discovered a large party involving more than 150 teenagers.

D'Evelyn said that, as deputies began to arrive, some of the participants began to drive away and some ran into the desert, abandoning their vehicles.

DPS and the Prescott Valley Police came to the scene to assist YCSO, and 65 participants, all under 21 and some as young as 15, were detained. Deputies wrote 34 citations, mostly for underage drinking, D'Evelyn said, noting that anyone under 18 was held until a responsible adult had been notified to drive them home.

Potential drivers were held until they could get a ride from a designated sober driver, D'Evelyn said.

Deputies found that the party had been planned "far in advance," D'Evelyn said, and was promoted to students from several area high schools through the use of social media using the name "Project X," in reference to a movie released last month that portrayed an out-of-control high school party.