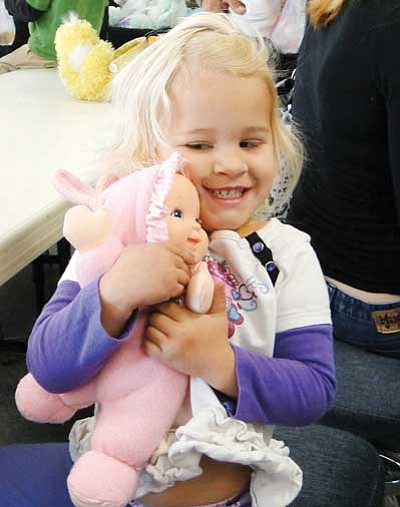 BBNPhoto/Pat Williamson<br> McKenna Wallace holds tight to the doll she won as a prize during the Cordes Lakes Community Association’s Easter egg hunt this past Saturday.

About 100 children hunted for eggs and visited with the Easter Bunny at the Cordes Lakes Community Association hunt this past Saturday.

With so much help from the community, about 30 prizes were available for kids in each of the four categories, plus several baskets and bunnies as grand prizes.

The various age groups were excited when it was their turn to exit the building and hunt for eggs on the Community Center grounds. Only one parent was allowed to accompany the younger children, and the other adults were watching from behind the fence. This worked great as the children got a lot of satisfaction in discovered eggs for themselves.

Many of the eggs contained a piece of paper with a number on it. These were the prize winners in each group and as their number was called, the children had their choice of a prize on the table.

In some cases, this became a very difficult decision, while others knew exactly what they wanted. Then there were those with a larger number watching the prize of their dreams being picked up by someone that got to choose first.

All enjoyed breakfast burritos, and the children picked up some 2,000 eggs. The extra prizes topped off the successful event.