Rescued Bell Rock hiker was one of the lucky ones 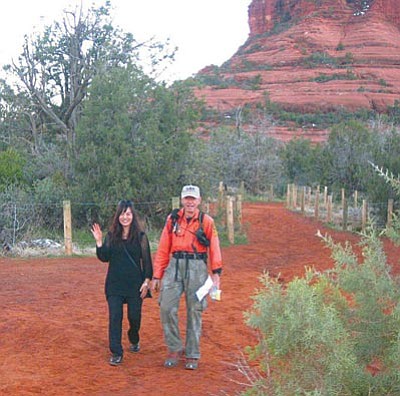 YCSO/Courtesy photo<br> Christine Pae, 38, of Ohio is escorted back to the trailhead by a member of the Verde Search and Rescue Team who found her after she became stranded on Bell Rock in Sedona.

A lost hiker in Sedona who was rescued just before nightfall after calling police for help recently was one of the lucky ones, according to Yavapai County Sheriff's Office rescue personnel.

On a day in late March, Christine Pae, 38, of Ohio started hiking up to Bell Rock at 4 p.m. and at some point wandered off the path and was unable to find her way back, said Dwight D'Evelyn, YCSO spokesman. About an hour later, Pae called 911 and let dispatchers know she was stranded without food or a jacket, and only 5 oz. of water.

A crew from the Verde Search and Rescue team found and rescued Pae just after 6:30 p.m., in part because Pae had a working GPS-enabled cellphone, and she remained in one place while waiting for rescue personnel.

"The outcome of this incident was positive, but that is not always the case," D'Evelyn said. In the past year, several hikers in the Sedona area placed themselves in situations far exceeding their knowledge and abilities, and two of them died.

On July 7, 2011, rescue teams searching for a missing person found her body about 50-100 feet below a ledge on Bell Rock, and detrmined that she died of injuries she sustained in the fall, D'Evelyn said.

Then in December 2011, a mother called YCSO to let them know her 21-year-old son was stranded on a ledge near Castle Rock. Rescue crews attempted to locate her son, but unfortunately, further attempts to reach him by cellphone were unsuccessful. A rescue team found the hiker's body about 150 feet from a ledge and determined he died from injuries he sustained in the fall, D'Evelyn said.

"It is the Yavapai County Sheriff's Office hope that the occurrence of such incidents can be decreased to zero."

Before planning hiking outings of any kind, the YCSO asks that you keep in mind the following hiking tips:

• Be in good physical condition.

• Be aware of weather conditions and forecasts.

• Tell someone where you are going (compose and leave an itinerary with a friend).

• Pay close attention to landmarks and your surroundings.

• Pack a map and compass.

• Stay on the trail.

• Stay put. If you are lost or injured, or nightfall is upon you, don't continue hiking.

• Never consume alcohol while hiking near cliffs or ledges.

• Do not hike out of your level of experience or physical capabilities; know your limits.