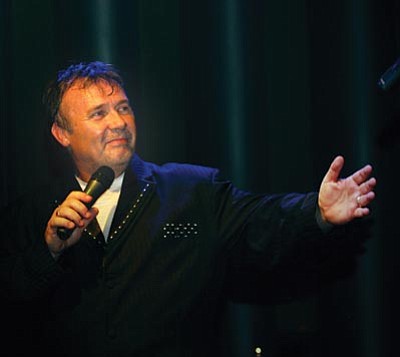 Terry Davies, "the Piano Man," brings his personal tribute to greats Billy Joel and Elton John when he takes the stage Saturday at the Elks Opera House.

British-bred Davies, who was born in Manchester, England, in 1959, grew up with a piano-playing father and grandfather, and his own talent for the keyboard appeared early in his life.

"With the help of piano lessons from two teachers, including Barbara McGlinchey in Glossop, Derbyshire," he played his first paid gig on Dec. 31, 1974, at the West Towers Hotel In Marple, Cheshire, he said.

Upon his graduation from high school, Davies joined the Royal Air Force, which soon found him playing the euphonium in the RAF band at Uxbridge in the London Borough of Hillingdon. During this phase of his musical career, he was immersed in pop and rock music and took the train north every Friday from London to Manchester to take over from his father as organist and keyboard player at a club in Salford, Manchester.

During this musical sojourn he caught "the bug," he said, and he was off to greater horizons as a professional performer. He played at various nightclubs in Manchester, where he joined the band Strawberry Pye, with whom he wrote and recorded his first record, "Walkabout." He spent more than two years touring the United Kingdom with Strawberry Pye before he became part of the resident band at The Garter in Wythenshawe, Manchester.

This proved to be a fortunate alliance because it was at The Garter that he got his first big break, he said, playing piano for Gladys Knight and the Pips, Dionne Warwick, Cannon & Ball, Tommy Cooper and many more artists.

He toured for many years all over the world "playing all kinds of music," he said, until he had an epiphany.

"I sat down with my wife, Annie, and decided to do Elton John and Billy Joel," he said, and his focus now takes him across a spectrum of venues. Reviewers describe him as "one of the finest, undiscovered talents in the U.S.A. today."

Davies' talent has eased into the "technically difficult music" of Joel, and he "sounds like John," he said. "I'm not trying to impersonate him," he said. "It just happens that I have a similar tone."

Davies' wife, Annie, has been singing for more than 30 years, he said, and is co-producer of the Piano Man show. She performs in the show as backup vocalist among the ensemble Davies will bring to Prescott.

Now a resident of Anthem north of Phoenix, Davies said Saturday's concert will be "a big mix of Billy Joel and Elton John," featuring a video as the backdrop that will take the audience through the story he sings.

That story will highlight such favorites as "New York State of Mind," "Only the Good Die Young," "My Life," "Your Song," "Daniel," "Rocket Man," "Candle in the Wind," and "Piano Man."

"It's kind of like watching a movie and a light concert at the same time," Davies said.

Tickets for the show, which starts at 7 p.m., range from $22 to $40 and are available by calling the Elks Opera House box office at 777-1370 or logging onto www.elksoperahouse.com. The Elks is located at 117 E. Gurley St. in Prescott.