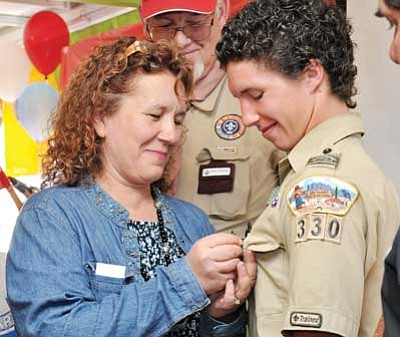 John Alder achieved a big milestone in his life this past year when he completed the requirements to become an Eagle Scout. He shared his accomplishment and basked in the pride of family, friends and fellow Scouts at his Eagle Scout Court of Honor Sunday in Dewey-Humboldt.

About 100 people joined Alder at the Puerto Vallarta Restaurant where Scout officials installed him as an Eagle Scout, and then fellow Scouts and friends roasted him during a festive meal.

Alder, a sixth generation Arizonan, is the grandson of longtime Mayer area rancher Bert Teskey. Teskey's father and Alder's great-grandfather achieved his Eagle Scout rank in 1926, and Alder obtained a copy of his certificate, framed it and presented to Teskey during the ceremony.

Another emotional part of the ceremony took place when Alder's mother, Angela, pinned his Eagle Scout badge on his uniform, and he in turn pinned a Scout mother's pin on a ribbon his mom wore. He also presented father's pins in gratitude to his father, Larry Alder, and stepfather, Tom Peterson.

The Prescott Elks Lodge 330 has sponsored Scout Troop 330 for 37 years. Alder joined the troop in February 2005. He earned his Tenderfoot and 2nd Class Scout designations by December of the same year. By April 2006, he earned his First Class designation, and achieved Star rank by August 2007. In May 2009 he earned his Life Scout rank, and in Sept. 2011 passed his Eagle Board of Review.

Boy Scouts must complete a set of requirements that become more stringent for each rank achieved. The requirements include knowing and reciting the Scout Oath, law, motto and slogan; responsible camping and hiking; outdoor skills and more at the Tenderfoot level, to helping teach skills to younger scouts and earning 11 merit badges at the Life level. The Eagle Scout must attain 21 merit badges, including First Aid, Citizenship in the Community, Citizenship in the Nation, Citizenship in the World, Communications, Personal Fitness, Emergency Preparedness or Lifesaving, Environmental Science, Personal Management, Swimming, Hiking or Cycling, Camping and Family Life.

An Eagle Scout candidate must have served actively as a Life Scout for a period of six months in numerous leadership positions within his troop, and, while a Life Scout, "plan, develop, and give leadership to others in a service project helpful to any religious institution, any school, or your community." The project must benefit an organization other than scouting, and the organization to benefit, the Scout unit leader and committee, and the council or district must approve the Scout's proposal before he begins to implement it. The requirements for the service project are stringent and the Scout must use a Boy Scout workbook to complete it.

McIntyre in speaking about the meaning of Scouting in his presentation, said, "To a boy, Scouting is a game, with fun, adventure, and fellowship, brought in through the outdoors, the bait on the hook of our program readily taken by boys. Without realizing it, the advancement program stimulates a boy's natural urge to achieve. By the time they reach 1st Class they not only have the skills to take care of themselves in the wilderness, but to come to the aid of others. ...a game that develops character and trains for citizenship through experience in the outdoors."

Alder is a quiet young man whose entire face lights up when he smiles. He told the nearly 100 people who attended his ceremony Sunday that he wasn't sure about a big party, "but now that I see you all here, it feels pretty good!"

It "felt pretty good" to Alder's family, friends and fellow Scouts, too, as they honored him with two standing ovations during the ceremony.