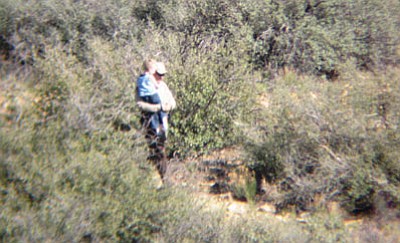 COTTONWOOD - A crew in the Yavapai County Sheriff's helicopter, Rescue 1, on Sunday found a stranded car and three people, including two children, who had been in it overnight after the car broke down, said a Sheriff's spokesman.

The call came from a person who wasn't with the car but had spoken with the driver and had been told the car, which had been off-roading, broke down near Thousand Trails Road, said Yavapai County Sheriff's spokesman Dwight D'Evelyn. The driver said he would walk out and meet with the person who called, but by 2:45 a.m., that person could not find the driver and called YCSO, D'Evelyn said.

Deputies located the driver around daybreak. He had been walking for several hours, during which time his cellphone battery had run out, said D'Evelyn, and he could not remember how to get back to the car.

Rescue 1 responded and within 10 minutes found the car, just after 8:30 a.m., but no one was there. The crew spotted the party, an adult, a 5-year-old and 7-year-old, walking near the Black Canyon Wash, D'Evelyn said, and directed ground searchers to them.

A deputy carried out the 7-year-old due to a pre-existing condition that made it difficult to walk.

Deputies arrested one of the adults, Robert Madison, 46, on a probation violation warrant and booked him into the Camp Verde jail.