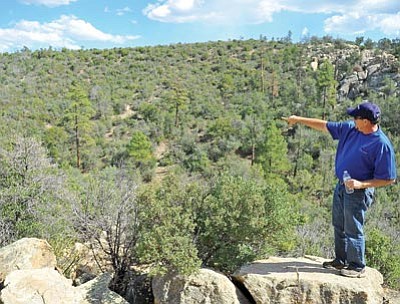 PRESCOTT - Trail connectivity and better access to a well-known prehistoric petroglyph site will be among the benefits that the community will reap from a recent city open space purchase.

In a unanimous vote on Tuesday, the Prescott City Council agreed to spend $56,000 for about 30 acres of land at The Preserve subdivision in west Prescott. That will open up a forested and boulder-studded tract of land for a new 1.8-mile section of trail, said acting Parks and Recreation Director Joe Baynes.

"This is a really unique opportunity," Baynes said Wednesday, as he walked a half-mile section of trail that is already in place, leading to the new open space.

Along with offering sweeping views of a string of ridges and canyons, the new trail also will connect with a series of petroglyphs in the Enchanted Canyon subdivision.

"The subject tract of open space is contiguous with and complementary to previously designated open space within the Enchanted Canyon subdivision," stated a city memo. "A significant east-west trail corridor has been identified with a western terminus at the Dalke petroglyph site."

To continue the connectivity, Baynes said, "The Over the Hill Gang (volunteer group) is ready to get to work on the new trail." He expected work to get started on Monday on about 1.4 miles of new trail.

That will link up with the nearly half-mile of new trail that the Over the Hill Gang built in the past month or two, for a total of about 1.8 miles of new trail.

Baynes said the yet-unnamed trail, which will end on Westridge Drive behind the old Lamb auto dealership on Gail Gardner Way, will be less than a mile walk on sidewalks to the Rodeo Grounds trails that the city recently added to its inventory.

That, in turn, may ultimately connect with other city trails. "We're hopeful that we will be able to connect the rodeo trails with the Greenways," Baynes said, referring to the trails that run along area creeks.

The open space purchase is the first of its kind for the city in several years - a point that Councilwoman Mary Ann Suttles made prior to the vote. "It's been a while since this council has bought any open space," she said.

The money for the purchase is coming from the city's open space fund, which is generated from a 1 percent sales tax for streets and open space. For the past two years, the city has reduced the amount of money available for open space to $500,000, after years of budgeting as much as $3 million per year.

The city purchase occurred in conjunction with a Preserve master plan revision, which provided for the same number of homes (144), but smaller lot sizes.

After this week's approval of the purchase agreement, the close of escrow is expected by Dec. 15.

The city plans a future trailhead parking lot about halfway between the two ends, Baynes said. The city memo estimated the cost of the trailhead at $8,000.