Veteran Stand Down event is slated for this weekend 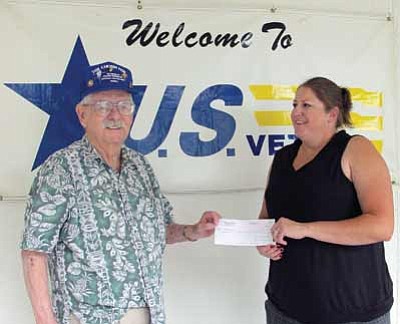 Courtesy photo<br> Skye Biasetti accepts a check for $1,000 from Walt Duffett of the Prescott Noon Lions Club in support of the Northern Arizona Veteran Stand Down.

According to Skye Biasetti, coordinator of U.S. veterans at the VA Medical Center in Prescott, "Stand Down" originated from a term used in times of war when exhausted combat units requiring time to rest and recover were removed from the battlefield to a place of relative security and safety. Today, though, she explained, Stand Down refers to a grassroots, community-based intervention program designed to help the nation's estimated 130,000 homeless veterans who must "combat" life on the streets, while noting that the hand-up - not handout - philosophy of Stand Down is carried out through the work of a host of volunteers and organizations throughout the nation.

The Sept. 23 emphasis will focus on legal services only from 10 a.m. to 2 p.m., with all other facets of the program being conducted from 9 a.m. to 2 p.m. the following day. Transportation will be provided periodically throughout the day by the Salvation Army, VA Medical Center and Northern Arizona Council of Governments.

For information on donations, which will be greatly appreciated, or volunteer work, contact Skye Biasetti at (928) 200-7692 or 1-800-949-1005, ext. 5908. In addition, she can be reached by email at sbiasetti@usvetsinc.org. Donations also can be dropped off at the church's Open Door location at the corner of West Gurley Street and Summit Avenue.