40 veterans honored with Medal of Valor 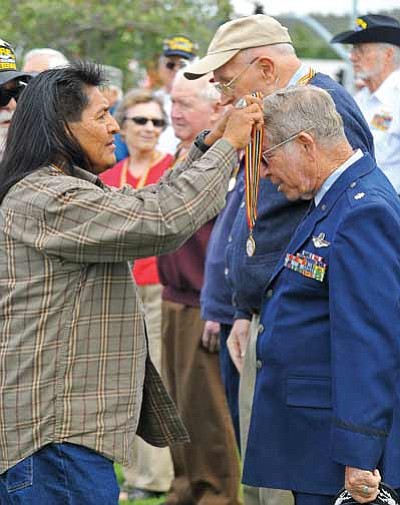 Forty veterans received the Warriors Medal of Valor on Thursday afternoon in front of their family members at Veterans' Memorial Island Park in Prescott.

Larry Kimmel, of the Miami Tribe of Indians in Indiana, blessed the veterans with a bundle of smoldering sage, and Ed Albert, a Cherokee of the Bear Clan, blessed them with Eagle feathers.

USMC Sgt. (Ret.) Alfonso Santillan Jr. described how Marshall Tall Eagle Serna designed the Warriors Medal of Valor to honor veterans who served in peacetime and wartime and show appreciation for their sacrifices.

"It's a big deal and it means a lot to us," said Steve Compson and Army veteran who served in Afghanistan.

Gerry Parmet, the wife of a Korean War veteran, said her husband was excited to be honored since he served in what is often called the forgotten war.

Ramos also said if he could go back, he would, but he can't because of injuries he sustained there that have him using a motorized wheelchair.

"I'm representing my husband Jack Skaggs who served in the Air Force during the Korean War," said Charlotte Skaggs. "It means a lot."

The front of the medal presented to the veterans shows the head of an eagle with an American flag in the background and two eagle feathers at the bottom of the medal. The red, yellow, black and white stripes on the medal's ribbon represent the four directions.

Kimmel told the veterans that he prays for them and for those who served and did not survive.

"I thank each and every one of you for your service," Kimmel said.

At the end, Santillan told the veterans that the medals carry a healing energy and he hoped they would feel that today and in the days to come.