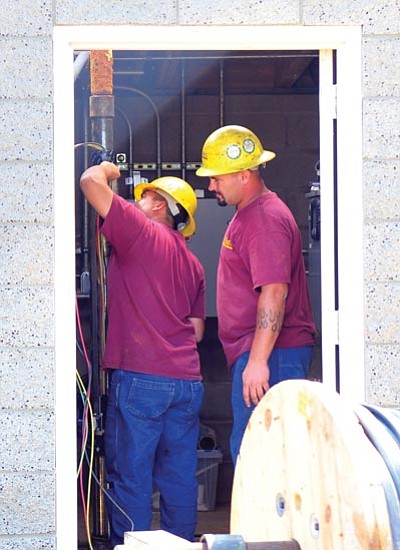 PRESCOTT VALLEY - A three-man crew from Chandler arrived Friday morning to install a 25- horsepower motor and a new pump at a well site adjoining the Mingus West subdivision.

He headed a crew that removed the motor and pump Tuesday morning from the Mingus West well site, off Highway 89A and Palomino Lane three miles north from the turnoff to the Yavapai County Fairgrounds.

Hudson said on Tuesday that the motor had shorted out at the 231-foot-deep well, which has pumped a maximum of 230 gallons per minute.

The well malfunctioned longer than a week ago, Utilities Director Neil Wadsworth said Tuesday. That breakdown in combination with a malfunctioning of the well west of the fairgrounds on either Sunday night or Monday morning prompted town officials to impose Level 4 water restrictions at Mingus West and the fairgrounds area.

Wadsworth said a contractor restored the fairgrounds well Monday afternoon. He announced during the Town Council meeting Thursday that he will ask Mayor Harvey Skoog to lift the water restrictions this coming Monday afternoon with the Mingus Well being restored.

Restoring the Mingus Well is time-consuming in part because the crew needed to band cable to the pump pipe to keep it tight, Hudson explained Friday morning. The crew brought 235 linear feet of cable.

Co-worker Steve Raber activated a crane around 10:15 a.m. Ricardo Sanchez hooked the pulley to a spool of cable on a utility vehicle.

Minutes later, Sanchez entered the brick well building and Hudson climbed atop it.

The repair work to the wells and the response from town officials drew praise from Mingus West homeowner Tammy Eaton.

"I thought they did a great job handling it," she said. She noted town officials distributed bottled water and jugs Monday.

Eaton, a homeowner for eight years, said the water restrictions did not create a "major inconvenience."