DeMocker trial may relocate to Prescott 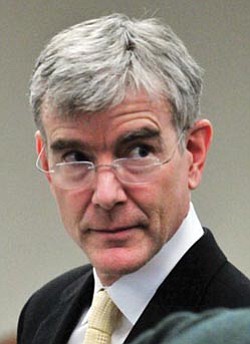 PRESCOTT - An administrative move may accomplish what motions filed by the Yavapai County Attorney's Office could not: Steven DeMocker's murder trial will likely take place in Prescott.

If the DeMocker case stays in Darrow's caseload, that would move the trial to Prescott, something for which the County Attorney's Office has been lobbying Darrow without success.

There are two other scenarios, however, that could come into play, because Presiding Judge David L. Mackey expressed an interest in reassigning the DeMocker trial, saying Darrow continues to hear motions in the James Arthur Ray sweat lodge trial, which began in March of this year.

"It's about being realistic about what one person should have to do in one year's time," Mackey said.

If he were to reassign the case, Mackey said that only he and Judge Michael Bluff have room on their calendars for the lengthy trial.

Mackey is the Division 1 judge and his courtroom, too, is at the Prescott Courthouse. Bluff's assignment, on the other hand, is Division 7, at Camp Verde.

The defense opposed any change of judge, but Mackey said, "The defendant objects to reassignment, but would stipulate to this court (Mackey) hearing the case" and an associated motion hearing, if he finds it necessary to reassign Darrow.

Mackey would most likely deal with the next major development in the case - a hearing on a plea agreement, something which neither prosecution nor defense appears to have much interest in, but which they have agreed to discuss anyway.

DeMocker's retrial on a charge that he murdered his ex-wife in 2008 was scheduled to begin this week, but Mackey granted a defense motion to delay it to allow the attorneys to better prepare.