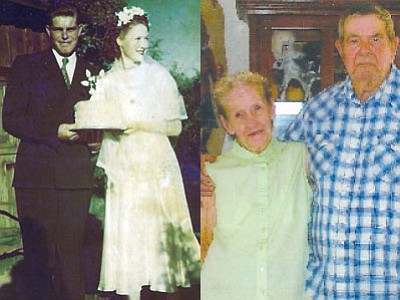 Bill and Sally Barringer will celebrate their 60th wedding anniversary on Sept. 8, 2011. They were married Sept. 8, 1951, in Bridgeport, Ariz.

The Barringers moved to Prescott, Ariz., in 1957, and Bill worked for Bunker Sawmill until he retired in 1990. Bill was also a reserve firefighter for Central Yavapai Fire for 21 years. Sally was a homemaker raising their three children. Bill and Sally were also active in search and rescue groups for many years.

The Barringers have three children, Mickey of Fulton, Mo., and Guy and Bill of Dewey, Ariz. They also have seven grandchildren and four great-grandchildren.

An open house will be 1 to 4 p.m. Sept.10 at the Barringer residence in Dewey.