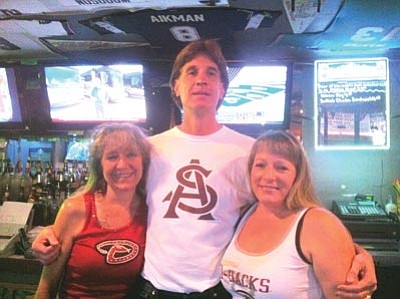 Some say it's the number of flat screen TVs. Others say it's the beer selection, comfy seating, excellent service or the atmosphere.

Whatever it may be, Pudge & Asti's Sports Grill in Prescott has it.

The local bar was recently nominated as one of 12 finalists for ESPN Mobile Web's Best Sports Bar in North America contest.

"It's huge. We are the only sports bar in Arizona to make it," said the owner of Pudge & Asti's Craig Denny, who is a fifth generation Prescott native. "I was pretty shocked. I had no idea. It was pretty surreal."

The contest was based on how many nominations each establishment received, and it all started with a friend of Denny's who shared a contest link with him on Facebook.com.

Before he knew it, Denny visited the ESPN web page and saw his bar listed as one of the finalists.

"We were scrambling around. I was calling people that I know in different states saying, 'get on there and vote,'" said Denny, who is the brother of Gary Denny, the owner of El Charro Mexican restaurant in Prescott, and nephew of 1983 Cy Young Award winner John Denny, who is a Prescott native. "I posted it all over Facebook and I was trying to get everyone in town to vote."

Pudge & Asti's fell short of winning the contest to Chickie's & Pete's in Phiadelphia, Pa., but none the less Denny said it was "huge" just to be nominated.

The local bar, which was established in 1983, might be best known for its friendly service and comradery between its customers.

"We believe we have the most loyal customers in town," Craig's wife Suzy Denny said. "It is truly like one big family."

Pudge & Asti's, which is located at 721 North 6th Street, offers a wide selection of bar food and has 22 beers on tap.

To see other bars that made the list of the best sports bars in North America, visit http://m.espn.go.com/wireless/hotcorner?id=6809535&wjb=.