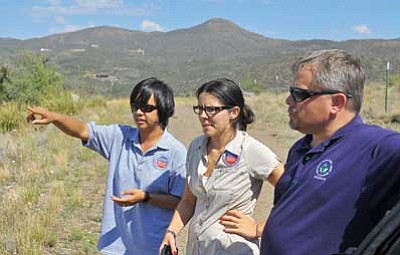 DEWEY-HUMBOLDT - Environmental Protection Agency officials are scheduled to conduct interim Superfund cleanup activities at some of the worst areas in Dewey-Humboldt for seven weeks beginning Sept. 12.

The EPA expects to issue a study by the end of 2012 that contains several long-term clean-up options for the entire Superfund site, seek public comment on it, then issue a final plan in 2013.

EPA officials also plan to sample soil from more yards this fall and winter, so they can get a better handle on natural levels of arsenic compared to unnatural levels caused by former mining activities on the Superfund site.

Since 2006 the EPA has sampled soil from 207 yards that sit below millions of cubic yards of toxic mine tailings left at the two former mine and smelter sites that make up the Superfund site. The EPA cleared soil from four of those yards so far.

But no government agency has tested any people, and that has some residents upset.

Several local residents complained to EPA officials at a community meeting this past week that they have no idea how people have been affected by the massive piles of mine tailings at the smelter and mine that have eroded down onto other properties including yards.

"I think it's time for someone to come to town and worry about people, not dirt," Dewey-Humboldt resident Ashley Preston said, prompting loud audience applause at the meeting in the elementary school auditorium Wednesday.

She charged that her daughter has suffered health problems because of toxic dust in the air, and she knows at least six other children who have similar problems. "If I had a choice to get out of here, I'd leave in five seconds," Preston said.

"This is scary," D-H resident Kimberly Bulock added. "Someone better start looking at children in this area."

The EPA clean-up is taking place to prevent future human health problems, EPA Project Manager Jeff Dhont responded. Human health issues related to Superfund sites are under the purview of the U.S. Agency for Toxic Substances and Disease Registry (ATSDR), he added. That agency can set up on-site blood tests, he said.

Treesha deFrance, chair of the Town of Dewey-Humboldt's Environmental Issues Advisory Committee, said she already had asked the ATSDR for help.

The University of Arizona is embarking on a new study of how toxins blowing in the air could affect residents, deFrance added.

Bulock said she's fearful about what the EPA might stir up in the air when it moves a tailings pile and clears the topsoil from 10 yards this fall. EPA officials said they will keep down dust by spraying water on the areas while working, and cover loads of dirt and tailings during transportation.

Several people asked EPA officials what levels of arsenic and other toxins are dangerous to humans, but Dhont said EPA has no "magic" level because it depends on the level and time period of exposure.

Residents at Wednesday's meeting also expressed concern about the lack of fencing on the mine and smelter sites, which are privately owned by several people and corporations.

Teens play in the smelter buildings and crawl into old mine shafts along the Agua Fria River all the time, Preston said. The EPA has found elevated levels of arsenic and lead on the river's banks that exceed soil standards.

While a 1.7-million-cubic-foot pile of mine slag that hangs on a steep slope of the smelter site above the river is basically an inert pile of hardened soil, chunks could fall off, Dhont said.

A 250,000-cubic-yard pile of ash containing arsenic and lead also sits on that steep slope. The EPA plans to apply materials to the ash pile this fall that will help hold it in place.

Preston cited the death of a local 2-year-old boy, who wandered onto the Iron King site last year while his mother was napping and apparently became stuck in a muddy sludge pit.

Her little brother almost fell into a deep shaft on the Iron King property, Preston added.

Dhont agreed that children have been playing on a 20,000-cubic-yard pile of Iron King Mine tailings that have washed down into a drainage on neighboring property, and that's why the EPA is moving that pile back up to the mine site this fall.

The real culprits are the companies that pollute this country, resident Bart Brush said.

"You can hear federal officials say, 'We need fewer regulations,'" he added. "We pick up the tab."