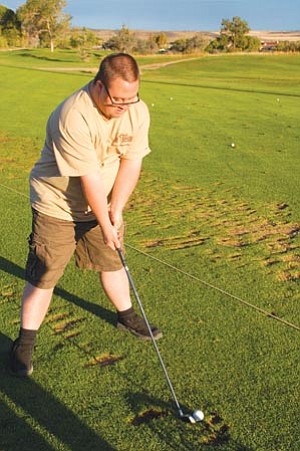 Cindy Barks/The Daily Courier<br>Justin Jaeger, a player on the local Special Olympics golf team, lines up a shot during a recent practice at the Antelope Hills Golf Course.

PRESCOTT - The high-fives, hugs, and words of encouragement were virtually nonstop on the Antelope Hills Golf Course one evening this past week, as about a dozen volunteer coaches worked with their student golfers.

Onlookers added support of their own, forming a gallery of sorts for the student golfers.

"You killed that ball," one spectator shouted after watching student golfer Justin Jaeger.

At ages ranging from 15 to 55, and including both males and females, the beginning golfers are not the usual golf team. But their coaches say the students - all participants in the Special Olympics program - will be ready for their big competition next weekend, when they field what volunteers say will be the first Special Olympics golf team from the tri-city area.

The enthusiasm of the students appeared to match that of their coaches.

Special Olympian William Allen, 24, was reveling in the directions he was getting from golfer Ron Sonnenburg.

"I like to learn," Allen said. "My favorite part is the swing."

Sonnenburg was complimentary of Allen's progress. "Every week, they improve," he said of the team. And of Allen, he said, "His attitude is just excellent."

As Special Olympian Josh Roberts and his coach Lee Miller stood waiting for the practice to begin, they chatted about the progress Roberts was making on his golf game.

Miller agreed: "Josh is a great driver," he said, adding, "What about putting?"

Roberts responded: "I need work on it."

Miller, a 25-year golfer, laughed, "Everybody needs work on putting."

Miller got involved in the program after hearing about the need for coaches from John Gunby, the head golf pro at the Prescott Lakes Golf Course.

After several weeks of working with Roberts, Miller said, "I wouldn't miss this for the world."

Along with Gunby, the Special Olympics program is also being overseen by Kim Stamper, the head of delegation for the Bradshaw Mountain Special Olympics Team, and by Mack McCarley, the manager of Prescott's Antelope Hills Golf Course.

Gunby, a Prescott resident since about February, said he broached the idea of a Special Olympics golf team after having experienced it while living in the Phoenix area.

"I used to coach a Special Olympics golf team in Tempe," he said. "I do it for the athletes."

Stamper said she began volunteering for Special Olympics when she was teenager, and she got involved again after she and her husband adopted children with special needs.

Although the team is based in Prescott Valley, Stamper said it includes athletes from around the region.

"We're not a school team; ours is all-inclusive," Stamper said.

Likewise, Special Olympics includes athletes of virtually all ages. "The youngest that can compete is eight, and our oldest athlete, who just passed away, was 87," Stamper said.

McCarley, who was helping with the coaching, said he was happy to provide the venue for the practices.

"This is what a municipal golf course is all about," he said. "It's about providing golf to all of the people."

Along with providing the expertise, the volunteers also pitched in golf clubs for the beginning golfers.

"All of the clubs have been donated," McCarley said, adding that about 15 sets went to the student golfers.

Stamper said nine of the local athletes plan to compete in the tournament, with some competing on teams with their coaches.