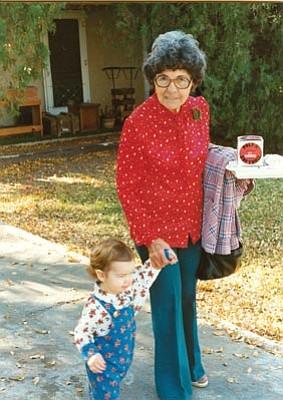 Sally's family moved to Arizona in 1915. Sally attended school in Mayer and at St. Joseph's Academy in Prescott. She met the love of her life, Clarence, while she was boarding at his aunt's in Mayer. She worked at Fred Harvey in Ash Fork, the Miller Valley Variety Store and for Montgomery Ward in Chris Town. She was a devoted volunteer, as the librarian for the LDS Peoria Ward, and Sally took care of all the flowers at Thunderbird Hospital in Glendale well into her 80s.

A celebration of Sally's life will be 1 p.m. Sunday, Oct. 23, 2011, with visitation a half hour prior at the Arizona Ruffner Wakelin Funeral Home, 303 S. Cortez.

Grave dedication will be private at Mountain View Cemetery.