Returning to the fold: Wolves struggle to return to Arizona since statehood 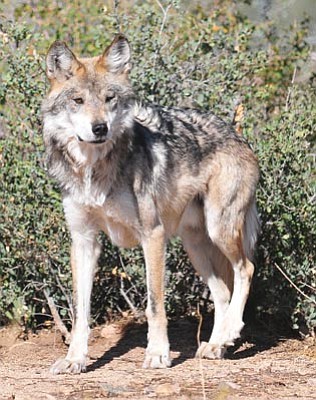 Les Stukenberg/The Daily Courier<br> Tasai, one of the two Mexican gray wolves at the Heritage Park Zoological Sanctuary in Prescott. The wolves are center to the zoo’s Centennial Zoofest on Saturay.

PRESCOTT - As Arizona was celebrating the birth of its statehood nearly a century ago, Mexican gray wolves already were facing their demise.

After Arizonans wiped out the wolves' major food source, elk, wolves turned to the large population of cattle that were moving in, according to the Arizona Game and Fish Department's website. That led to the successful effort headed by the federal government to basically wipe out wolves in the Southwest a century ago.

By the 1970s, federal officials changed their policy toward Mexican gray wolves possibly just in time to save them from extinction. They hired a trapper to find the remaining Mexican grays in Mexico, and he caught five of them.

After a recovery plan was completed in 1982, and the first Mexican wolves were released back into the wild in 1998 with a multi-agency goal to have 100 in the wild. The first wild pup was born from wild parents in 2002.

They are the smallest and most unique subspecies of the gray wolf, and they were the first wolves to cross the Bering Strait onto this continent, said Chris Bagnoli, Arizona Game and Fish field team leader on the Mexican wolf recovery program. Their historic range includes the Prescott region.

"For many people, instead of the bloodthirsty killer of our fairy tales, the wolf is a majestic creature that symbolizes freedom and nature," the Game and Fish website says. "However, whether it is fear of attack or loss of livelihood, many people still do not feel that wolves should be roaming free in Arizona."

Saturday's Centennial Zoofest at the Heritage Park Zoological Sanctuary is highlighting the Mexican wolves' story, partly because this is National Wolf Awareness Week and partly because the zoo is directly involved in the wolf recovery program.

Mexican gray wolves first came to the Prescott zoo in 2006.

The zoo's current wolf residents are Imado and Tasai, 6-year-old and 7-year-old males.

Imado and Tasai have a good chance of being involved in the recovery program's breeding or release programs, zoo Director Pam McLaren said.

Because they have a chance of going back into the wild, zoo employees treat them differently than other zoo animals that often are permanently injured and unable to be released, she explained.

Zoo employees keep their distance from the wolves so the wolves will keep their fear of humans. And the wolves get only wild meat so they won't get into the habit of liking cattle or sheep said Wayne Fischer, animal care manager at the zoo.

Of course, wolves are naturally curious and they do check out visitors to their enclosure.

"They're beautiful, elegant, graceful predators, which is amazing to see up close," McLaren said.

"Wolves are really unlike any other wildlife," Bagnoli said. "People either love them or hate them."

Federal and state officials have struggled in their effort to reach the recovery program's goal of at least 100 Mexican wolves in the wild.

The wolves aren't allowed to roam outside a designated area of about 9,000 square miles in Arizona and New Mexico. If they do, officials capture or kill them. They also get captured or killed if they attack livestock.

Arizona's largest fire in history didn't help the wolves this year, although it could have been worse.

The fire burned through three wolf pack territories and forced the wolves to move their dens, Bagnoli said. But the pups in two of the three packs survived.

Most Mexican wolf mortalities come from humans, including illegal shootings. Two deaths this year are under investigation.

While New Mexico recently dropped out of the recovery program altogether, the Arizona Game and Fish Commission would like to get the wolves delisted as a federally endangered species and manage the wolf recovery at the state level, where it says the program could be more affordable, effective and efficient.

The Arizona Game and Fish Commission hasn't stated how it would manage the wolves.

Meanwhile, the U.S. Fish and Wildlife Service has embarked on a revision of its 1982 recovery plan.

And Mexico released Mexican wolves into the wild for the first time Oct. 12 about 80 miles south of Douglas.

"Trying to integrate wolves into a modern-day multi-use area has been a challenge," Bagnoli said. "Ultimately, the goal is to get to the point where Mexican wolves are considered part of the landscape."