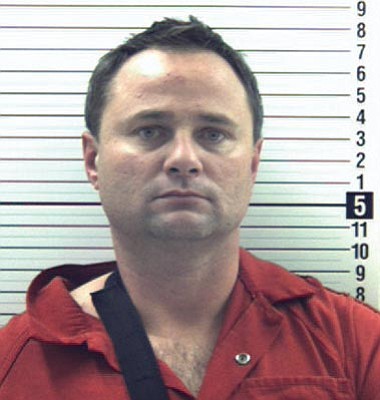 Prescott police arrested a man Sunday on charges including theft of a motor vehicle and aggravated assault on a peace officer after he allegedly tried to run down an officer with a sports utility vehicle stolen from a Prescott business.

At 1 a.m., officers responded to a criminal damage call in the 600 block of East Sheldon Street and saw a man, later identified as Hullihen, walking near a building that had a broken window. An officer called out for Hullihen to stop, but police say Hullihen got into a Dodge Durango near the building, reversed the SUV, and almost hit the officer, who had to jump out of the way. As the officer told him to stop, Hullihen accelerated at him again, according to the police report.

Then Hullihen stopped the SUV when there was no way to get out of the lot since parked vehicles blocked all the entries and exits, according to the police report.

An officer found an open bottle of Dos Equis beer next to Hullihen on the ground that was still cold to the touch, according to the police report. An officer later saw that a door to the business had been kicked in, found a Dos Equis beer cap on the floor in the hallway of the business and learned from the owner that the keys to the Durango had been kept on a key board inside the building.

At the police station, Hullihen told officers that he while he was a passenger in another vehicle he saw a man smash in a window at the business he was later arrested at, jump in the SUV, and back up, said Lt. Andy Reinhardt, spokesman for the Prescott Police Department.

"Hullihen said he smashed in the passenger side of the SUV, and as he did the man slid out the drivers side door and took off running," Reinhardt said. "Hullihen said he had just slid into the driver seat and was backing up the vehicle into a parking space when police held him at gunpoint."

Earlier that evening, officers had answered a call in the 400 block of East Sheldon Street about a burglary alarm going off. When the owner of the business arrived, he told officers a red ATV was missing, according to the police report.

When an officer asked Hullihen if he knew anything about the burglary and theft of a quad, Hullihen said he did not have anything to say about that, according to the police report.

But later that evening, a towing company reported picking up the stolen quad from the 700 block of South Montezuma Street and two people who knew Hullihen said they had seen him driving the red ATV earlier, according to the police report.